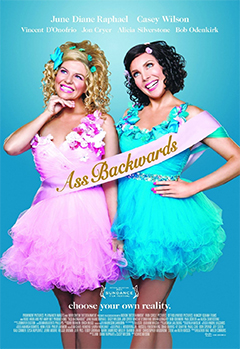 June and Casey. Casey and June. Casey. June. June and Casey. Girls. Please. What happened? I can’t remember at what point in Ass Backwards it hit me that I was watching a bad movie, but it hit me. It hit me harder than life hit Kate and Chloe, the characters of the film, repeatedly, for nearly an hour and a half. And that’s really the whole movie right there. Or at least that’s how it feels most of the time.

Ass Backwards is, in all actuality, a film in which June Diane Raphael and Casey Wilson play two broke best friends (Kate and Chloe) taking a cross-country trip for the sake of reliving their pageant days. After failing in their youth, it’s time they prove to themselves and the other gals that they’re real winners. There’s no denying that the synopsis sounds like it should have been renamed Romy and Michele’s Pageant Reunion: Electric Boogaloo, and that wouldn’t be a bad thing if Raphael and Wilson had any idea how to capture the fun of a flick as wacky as that one.

One might think the idea of two best friends down on their luck might be easy to relate to, especially considering just how over the top and fun the girls can be on television. Anyone who has seen Happy Endings or Burning Love knows that Casey Wilson and June Diane Raphael are a riot to watch. The problem here, sadly, is that their comedy writing is a bigger disaster than Bride Wars. Does anyone but me actually remember that movie? Kate Hudson and Anne Hathaway as two best friends fighting over a wedding date? Terrible movie, but arguably fun times for everyone.

It’s actually pretty ass backwards (insert audible groan here) how much more entertaining Bride Wars manages to be than this one, even more so when you consider the fact that Bob Odenkirk shows up in this one. Weirdly enough, his character might have been the only person I was able to relate to throughout the whole film. He rushes to kick the girls off-stage in their youthful days and you anxiously wait for him to do it once they’re all grown up because you wish you could be the one shutting them down.

It’s hard to pinpoint the most frustrating parts of the writing and execution of most of the jokes. It could be the try-hard attempts at making a fun and flirty movie for gals while still trying to amp up the crass humor in the worst way possible, it could be the repetitive nature of a lot of the jokes, or it could be the fact that it arguably raises the bar for how bloated a ninety minute comedy can be. Frankly, the only thing that managed to avoid outright terribleness was the humor presented in a good chunk of the pageantry.

That little good in a movie that wants to be entertaining is hard to get through. Even Alicia Silverstone, who has found her way into some incredibly ridiculous and delightfully camp  films lately – Vamps anyone? – looks bored out of her mind most of the time. And that’s exactly how Ass Backwards makes everyone feel. By the time you reach the end of the film, you start to wonder if every person who judged Kate and Chloe’s lifestyle decisions throughout was really just being judgmental of the bad writing, and by all means, they probably were.

It’s really a shame to see both of these talented comedy actresses fall so flat while starring in their own film especially in a year with some great female writing. Sadly, not every movie can be a pageant winner, and one can only hope that Casey Wilson and June Diane Raphael find a better screenwriter to guide them to something worth putting into competition, be that in television or film.