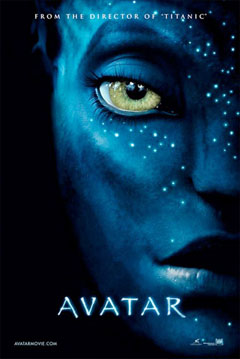 So I recently had the displeasure of enduring James Cameron’s preachy, unoriginal, over-indulgent sci-fi brain rapist, Avatar. I’d like to shake the hand of the netizen who named it Avatar: The Last Samurai of the Ferngully Who Dances With Wolves.

This is a movie about the evils of corporate greed… that cost 200 million dollars to make and has a promotion partnership with McDonalds, of all places. This is a movie that glorifies the triumph of a technology-free existence… that’s about seventy percent CG. But beyond the ideological inconsistencies, let’s look at the film-making.

The villains were poorly defined. The only thing that fleshed out their motivations was this generation’s mass delusion that anyone who wants money or war is inherently evil. And let me clue you in on something. Truman did not giggle fiendishly after Hiroshima and Nagasaki alright? Don’t get me wrong, I love Japan, but Google Nanking 1937 before you fold your next paper crane. We fought for a reason, and the villains in this film should have had a reason too.

In the movie the Na’vi had something that the humans wanted, inventively named unobtainium, so they blindly and ignorantly rain their tyrannical terror over the innocent blue townsfolk, but there were no active attempts to trade with the Na’vi in this whole film. Jake comments that the human race had nothing that the Na’vi could ever want, since the Na’vi were so ‘enlightened.’ Bullshit. Like the Na’vi had no use for our helicopters? Our communication gadgets? Or even our weapons, surely to God they could have used a bow and arrow upgrade.

I don’t understand why our culture geeks out about its latest iPhone apps, shares its ideas across oceans with resources like YouTube, and still propagates this idea that we’d all be better off frolicking in the forest in loincloths. Human beings have done great things. My computer, my car, and my air-conditioned home are all amazing, and I applaud the technological innovation involved. And I’m sick of Hollywood using resources created by the very people they condemn to spread these guilt-mongering messages.

Yes, the movie looked great. But my sister put it best when she said it was like getting yelled at by a beautiful, desperately stupid girl for three hours. She might be good for a one night stand, but are you really gonna call her again?

by Lindsay Penn of Linzer Dinzer