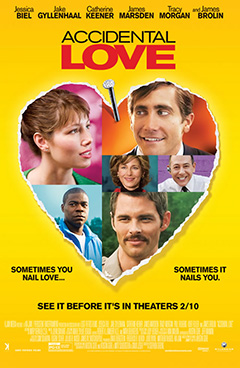 David O. Russell’s temper is infamous [1], so when his films in production make headlines, no one is surprised. Seven years ago, Russell was supposed to make a movie with a post-Zodiac Jake Gyllenhaal and a post-Chuck & Larry near-Timberlake Jessica Biel looking for a big push after Neil Burger’s The Illusionist. Back then tentatively titled Nailed, it was loosely -keyword; loosely- based on Al Gore’s daughter’s novel about a twenty-something chic in Washington [1].

The rest is, more or less, film history. Running into financial troubles during the market collapse, the production ran out of money, people weren’t paid, Russell got mad, walked out and Nailed was canned until it was reborn as Accidental Love– the story of a twenty-something carhop [1] named Alice (Biel) who, on the night of her would-be-or-not engagement with the eager opportunist Scott (Marsden, not Cyclops related), gets a nail stuck in her brain that affects her personality.

At a loss because she doesn’t have insurance, she heads to Washington in search of the enthusiastic representative Howard Birdwell (Gyllenhaal) hoping to secure universal health care for everyone!

If you’ve seen the American trailer, I feel for you because it seems to use some of the better bits telling the whole story — the UK trailer is definitely less spoilery, which also includes a Portuguese-cursing Biel and that awkward tension between the not-a-love triangle. It’s as a ridiculous concept as ridiculous can be, and things work out in short segments — Bill Hader and Kirstie Alley have some funny lines in their short roles — however, it is Catherine Keener who steals everyone’s thunder with an early draft of Veep‘s Selina Meyer, the constituent-hungry ex-astronaut representative Pam Hendrickson. She’s not heavily featured on promotions (that I could see), but every bit of her actions are gold pushing Accidental Love into The Campaign territory. I did burst out laughing during her Squaw Girl smear campaign.

Overall, as far as Accidental Love goes, it’s far from being the worst I’ve seen this 2015, let alone this past decade.

Then again, I have a history of enjoying films that sometimes people hate with a passion — Shirin Farhad Ki Toh Nikal Padi, Dolly Ki Doli, Spring Breakdown, Everly, Lima 13, Zhongkui: Snow Girl and the Dark Crystal, The Sweetest Thing, Karate Girl, Casa de mi Padre, Mirror Mirror, Gippi, those hated Rani Mukerji and Nicole Kidman flicks just to name a few. In fact, The Chef, The Actor, The Scoundrel is one of my favorites of 2013.