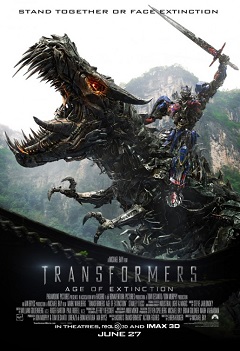 Apparently, I have some sort of twisted relationship with Michael Bay and the Transformers franchise. We got off to a great start with 2007’s Transformers, which was surprisingly fun and cool to watch. However, the terrible Revenge of the Fallen managed to successfully kill an insane amount of brain cells, yet millions of people somehow went to see Dark of the Moon, which was an slight improvement. I remember being skeptical about seeing the third film, but a review from Living in Cinema’s Craig Kennedy pushed me into seeing it a bit faster than I should have; plus, that final battle scene was phenomenal to watch in spite of having to endure the Witwicky family for most of its running time.

Anyways, Transformers: Age of Extinction involves a brand new human cast and Dinobots in terms of new thing. The film takes a five-year jump following Dark of the Moon and shows us the consequences of the Chicago battle scene, which pretty much resulted in mankind, led by paranoid CIA Agent Attinger (Grammer), wanting to erradicate all remaining robots, forcing Autobots into exile. Meanwhile, struggling inventor and single father Cade Yeager (Wahlberg) unintentionally stumbles upon an injured Optimus Prime (Cullen) in Texas and repairs him. However, the Prime reveal leads to the CIA hunting Prime, forcing the Autobot along with Cade, his friend Lucas (Miller), Cade’s daughter Tessa (Peltz) and her boyfriend Shane (Reynor) to escape Texas, reunite with all the remaining Autobots — Bumblebee, Drift (Watanabe), Hound (Goodman) and Crosshairs (DiMaggio) — figure out what’s going on and stop the upcoming threat against Cade and the Autobots.

By now, anyone that is going to watch a live-action Transformers film should know what they’re getting into. If explosions and robots fighting are your thing, then by all means go see this because Michael Bay delivers on this in ways only he can do it [see: over-abusive]. The screenplay is a pretty mixed bag: some of it feels meta, funny, smart of redundant, stupid, boring and repetitve. At least, the dialogue is nowhere near as god-awful as it was in Revenge of the Fallen. I’ll admit that I actually laughed at Age of Extinction, of all films, addressing briefly the problems of small local cinemas facing with the existence of sequels and remakes [1] just before Cade meets Prime. That felt pretty ironic to watch in the fourth film of a profittable franchise.

Acting-wise, Mark Wahlberg is a far superior lead actor than Shia Labeouf. He keeps you hooked successfully and he had some character development through his interactions with Cade’s daughter and Prime. The rest of the cast? The dynamic between Wahlberg, Peltz and Reynor felt quite similar to that between Bruce Willis, Liv Tyler and Ben Affleck in Armageddon. John Goodman deserves better than voicing an Autobot, though. While Kelsey Grammer hammed it up quite well as the main antagonist, it’s Stanley Tucci’s Transformers-building KSI head Joshua Joyce who literally stole the show from everyone, including the robots, thanks to a funny yet solid performance and being fed some of the film’s best lines as well as getting a redemption arc. Tucci’s Joyce had a obsessive drive to replicate the Transformers with good intentions, which led to all the chaos happening in Age of Extinction. I really wished that Bay used a better screenwriter and centered most of the story around Joyce instead of Cade et al.

My biggest problem with Age of Extinction is that it felt way too lengthy to watch. The Transformers franchise has always had its share of usual flaws, stereotyping (Bingbing avoided it, but Watanabe couldn’t) and lousy scenes. However, the length in this film exponentially overexposed the flaws, especially when Wahlberg and Tucci aren’t around. And one of the saddest parts of this film is the brief use of the Dinobots, which happened near the end of the film. That’s pretty unsettling, considering they were heavily involved in the film’s marketing and that reminded me of The Matrix Revolutions‘ ending a bit.

Extra quarter star for Wahlberg and Tucci, who made this more watchable than it should have been.

P.S.: From the looks of it in YAM Magazine, I guess I’ll end up covering the entire film series until either Tom Hiddleston (or Benedict Cumberbatch) joins the Transformers cast. :P