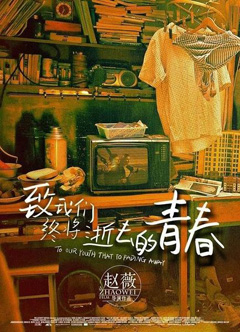 On the weekend most of the world was having seizures for how long they’ve been waiting for Iron Man 3, news that Vicky Zhao Wei’s directorial debut — her graduating student project nonetheless — would be going head to head with the Marvel Hollywood blockbuster was surprising. After all, there are no other films that could be more different.

So Young (or Zhi Qing Chun, for short) is based on the novel by Xin Yiwu about a woman’s, Zheng Wei (Yang), college days, the friendships she establishes while she’s living in the dorm and her falling in and out of love- first brokenhearted by the guy that made her dream of love, Lin Jing (Han), and then the man who taught her how to love. As years pass by, friendships fade, reunions happen, connections are rekindled; all in the name of nostalgia.

Made for nearly $5M USD, the film made ten times that in its first week run [1][2] and reached nearly $80M USD by its second week [1]. So in any case, Zhao Wei is making good business. Set in the 90s, drawing inspiration from Zhao’s own college days, So Young feels like tailor-made for those born in the early 80s and were going through college in Mainland China in the 90s, which is a very specific demographic, a lot similar to You Are the Apple of my Eye, which focused strongly on Taiwan’s youth.

The main problem I had with So Young, however, is that I couldn’t connect with Zheng Wei. At all. I know women aren’t supposed to be the serviceable petite dolls for guys to pin over them, but she was kind of difficult to like as a person. Though I admit that the friendship build-up between her and good-hearted (and quite docile) Ruan Guan (Jiang), determined Weiyang (Zhang) and boyish Xiaobei (Liu) was paced and believable. Not being a Mainlander of college years in the 90s didn’t help much with the references, but I did spot Maggie Cheung on posters, as well as Han Hong’s cameo with the sketchy love advice for Zheng Wei.

I really did not get the romantic aspect of the film, I never for one felt either Lin Jing or Xiaozheng (Chao) were suited for Wei Zheng, especially for bailing the way Lin Jing did and how Xiaozheng behaved. I understood his reasons, and the last third of the film makes all of it a little too self-explanatory, which I think could have been handled differently, but it never feels right. But maybe that’s the point? By the end of the film we’re all supposed to understand this as grown-ups and move on? Even like that, So Young doesn’t seem to be completely satisfactory. Though, it was interesting to catch a glimpse of Cya Liu Yase, whose striking face features (and out of the blue outburst) stand out from the story.

Overall Zhao Wei’s debut seems competent — at moments I wished she had more control over her camera to make more delicate movements; the moment she sweeps from Zheng Wei to the television jumps out. It’s not groundbreaking in any sense, but her sensibilities as an actress aid her actors. Might require an extra watch, but not recommended for everyone. Especially due to its convoluted last third.