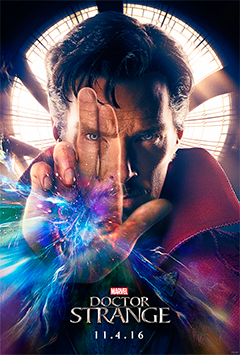 Continuing with the Phase Three of the MCU, Doctor Strange gave us more of what we are used to, and at the same time provided us with new sights and possibilities that give the whole Marvel film franchise a new direction.

This is the origin story of Doctor Strange, who started his hero journey as famous neurosurgeon Stephen Strange, who loses the use of his hands in a car accident. Eyes always on the road, kids! After months trying and failing with experimental surgeries, he uses the last of his resources to go to Kamar-Taj, where he was said he will find a solution. There he finds a new world of magic and other dimensions, in which he will have to shed (some of) his arrogance in order to learn. Also, there’s this guy Kaecilius, who used to be a master in Kamar-Taj, but now has gone rogue and plans to unleash a dangerous and powerful being of the Dark Dimension, into our world.

Benedict Cumberbatch in the titular role raises himself as the best actor of the film. Not that the rest of the cast did a bad job, far from it, but he was the one where most of the focus was on and it pays off. Cumberbatch gives us a very charismatic performance, and by the time the movie ends, we have a clear view of what makes Stephen Strange tick. His dramatic moments following the car accident show us a level of emotion not seen in Marvel films, since Robert Downey Jr’s depiction of Tony Stark’s PTSD in Iron Man 3. Cumberbatch not only pulls off an American accent, but simmering anger very well too!

Talking about Iron Man, Doctor Strange clearly mirrors the first MCU movie, with both characters having an origin story that is similar at its most basic description, as well as similar personalities. That said, there are enough differences that it will be unfair to call Stephen Strange the Tony Stark 2.0, even if it’s obvious Marvel is paving the way to make Benedict Cumberbatch their flagship actor after RDJ stops making Marvel movies in the not so distant future.

As was mentioned before, the other characters didn’t have much of an arc, except possibly Ejiofor’s Karl Mordo. His character’s story was linked to Strange’s growth as a sorcerer in Kamar-Taj, as well as the situations he was flown into after Kaecilius’ plan moves forward. His inflexibility gives him a black and white filter, which makes the revelation about certain character’s actions something he cannot neither handle nor accept. This is quite the depart from his comicbook counterpart’s origins story.

The rest of the cast did a mostly great job with what they were given. And I specially appreciate that they can handle vulnerable looks when needed. Even the bad guys! Yep, while Marvel still has a problem with their villains, specially in their origin stories, Mikkelsen’s Kaecilius does a good job at trying to make us sympathise with his plight, even if we know it’s not going to work.

As for the other elements, they are good. Functional, you might say. The script is peppered with humor as is usual in MCU films, and while some of the times it nailed it, in others it had the same problem of Thor: The Dark World, where it diffused the emotional impact of some great dramatic moments. That, and there’s a tad too many Deux Ex Machinas in order to make Doctor Strange’s hero journey easier. I appreciate how different the villain situation was solved in this script though.

The cinematography was OK, but not as creative as, for example, Guardians of the Galaxy, which is fine in those moments where acting is more important, but could have used more inspiration everywhere else. The music had its moments, though! It might not make you hum as you exit the cinema, but can be recognizable if you happen upon it at a later date, and it helps the overall look of the film. Michael Giacchino doesn’t use temp music and it shows.

So yes, all the elements of the film worked fine, but there was one element that managed to get above the others.

While this film is not that different from how Marvel usually depicts origin stories, the implications of multiple dimensions and specially how they are constructed visually, paints the whole thing with a different brush. And it is fantastic. So yes, if you have to watch one Marvel movie in 3D, let this be the one. Sure, Ant-Man‘s micro-universe was amazing, but Doctor Strange‘s multi-dimension journey and sorcery fights is out of this world. It’s different from anything we have seen from Marvel so far. The creativity of all the visual elements can blow you away, specially if we start thinking about how complicated it must have been to put that on paper for the scripts. There was definitely a lot of work during the storyboards phase and with concept arts. This film is Inception on drugs given by that scene from 2001: A Space Odyssey.

Doctor Strange is a very enjoyable movie, and another success for the MCU.

Just don’t watch this movie with an altered state of consciousness, at least not the first time.

P.S.: There are two extra scenes! One after the main end credits that relates to Thor: Ragnarok. The other one is at the very end, and it relates to a Doctor Strange sequel. Yep, a sequel has been promised. Stay put!