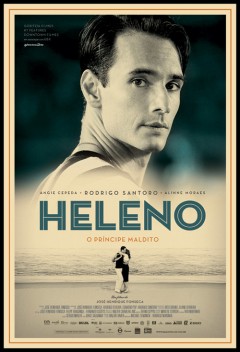 For those who don’t know much about Brazilian football player Heleno de Freitas, Google him because José Henrique Fonseca’s Heleno isn’t a detailed account about his achievements or his pre-football days; it deals with his troublesome personality and downfall instead.

The opening minutes of Heleno shows a badly looking and maddened Heleno (Santoro) during his final days locked inside a sanatorium, but most of the film takes place in the late 40s, after we are treated to brief, beautiful, photographic scenes that showed how he became a top star by scoring lots of goals for his team, Botafogo.

Heleno’s decline in the late 40s is shown through his strained relationship with his fellow teammates and Botafogo’s authorities, his womanizing — he juggles his relationship with his wife Sylvia (Moraes) while he beds his mistress Diamantina (Cepeda) — and ongoing addictions to ether and smoking. However, his advancing syphilis worsened with time and he refused to treat it, leading to his eventual death.

Heleno boasts lovely music use, stunning black-and-white cinematography and gorgeous photography during the entire film. Whenever we see Heleno playing on the field or hanging around Rio de Janeiro, it’s visually great. But even better, Rodrigo Santoro’s performance is excellent to watch. His portrayal of the declining Heleno de Freitas switches gears and emotions smoothly when he has to play as the confident womanizer, the arrogant football player, as well as his ongoing madness and physical degradation because of his untreated syphilis.

While Angie Cepeda and Alinne Moraes fare decently in their supporting roles, Heleno‘s biggest problems lie in the slow pacing and film structure, which dragged the film down at times. I won’t deny that Heleno resembles Martin Scorsese’s Raging Bull because Heleno de Freitas and Jake LaMotta (who is still alive, by the way) are similar regarding their career frustrations, sport skills, relationships with women and their self-destructive ways. However, Scorsese’s film had stronger supporting characters, a poetic feeling, a better use of LaMotta’s real-life events to make audiences connect with him easier, and a more cohesive structure and smooth pacing than Heleno wishes it could have, despite Santoro making Heleno’s decline highly interesting to watch.

As a football fan, I really wished that Heleno ended up being a great film. It had the ambition and potential to be a stellar football film, but it couldn’t match its own high ambitions by the time it was over despite some of its great moments. I believe that Rodrigo Santoro and the cinematography truly deserve award nominations, but I’m not really sure if Brazil will want to go with Heleno as their Best Foreign Language Film candidate for the upcoming Academy Awards.