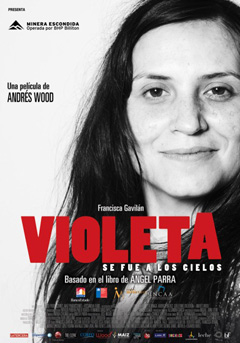 Violeta Went to Heaven is a film about Chilean artist (composer, writer, musician and visual artist) Violeta Parra, who is famous for composing Gracias a la Vida (Thanks to Life), which was made immensely popular by Mercedes Sosa [1].

I actually know very little about older music, let alone folk music, LET ALONE Chilean folk music, so when I embarked on the trip through the life of Violeta Parra, I wasn’t prepared for this. Taking the book, written by Violeta Parra’s son Ángel Parra, as a base, scriptwriter Eliseo Altunaga and director Andrés Wood take us through a non-chronological view of Parra’s life until her suicide in 1967.

The film briefly touches upon her childhood, and deals a bit with the relationship Parra had with her children, how she left for Poland to sing and stayed there for a couple of years after the death of her baby, and focuses a lot on her relationship with Gilbert Favré, which would ignite some of her most effervescent songs about love and heartache. However, it is the sequence of Arriba Quemando el Sol (Up There the Sun Burning) [1] that really ignites the sentiment within the viewer.

Francisca Gavilán was in charge of portraying the Chilean icon, and man~ She does look a lot like her. She expertly anchors the whole film and carries it wherever director Wood wants to take it — which is EVERYWHERE. At moments the film is a bit confusing, but it has a certain magic realism quality to it. Although the film doesn’t contain fantasy elements, it seems a bit like it when we’re suddenly transported to Parra’s childhood when she’s thinking of it.

The pacing of the film might be a little slow to some people, and it does look like an art house film more than it does a commercial biopic, but the subject matter lends itself perfectly to the mood of the film.

Violeta Went to Heaven is the perfect introduction to Parra’s work, and will probably make a fan out of a few. For the fans of the artist, they may find some nitpicking to do, as all die-hard fans do, but for the most part I think they’d be highly satisfied with the quality of the production and the handling of the story, which is a rarity in the biopic genre.