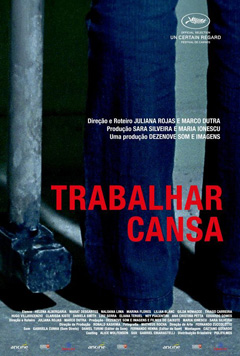 Trabalhar Cansa is a bizarre mixed genre film. The film, for the most part, chronicled the story of a regular family in Brazil that was on the brink of an economic downfall. Hubby Otavio (Descartes) has been let go from his company and is looking for a replacement job, just in time when wife Helena (Albergaria) was just turning around to open her own minimarket.

It all seems fine and dandy, like a regular drama film about a family looking for a way out of their current economic situation. Otavio looks for any job hopelessly, while Helena is working hard to make this minimarket idea work for the sake of her family. However, strange things begin happening…

But no, Trabalhar Cansa isn’t your regular horror about haunted places or ghouls — this is no Dark Water (original Japanese or American remake version), though… there is that awful black wet mark on that wall. In the beginning, our minds begin playing with the idea that someone in the Helena/Otavio circle might be playing with our minds, but as stranger things begin happening, we know this is no mere mind game.

The problem with the build up is… that, instead of accepting the films explanation to what’s going on, we end up with a big “WHAT?” after another big “WHAT?” – the suspense of disbelief was so much that the link was broken. We are left not with Otavio’s job turnaround, a possibly a change to Helena’s minimarket… but a huge audience question: what would YOU do if you found a large (almost humongous) human/non-human teeth in a property you’ve just rented? Only in the horror genre, I suppose.

Hard Labor is part of the 2011 Lima Film Festival: