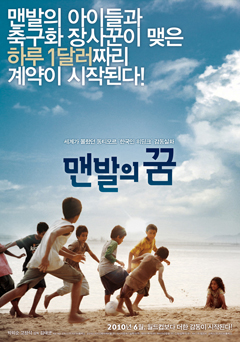 Chosen by South Korea as their representative at the latest Academy Awards, A Barefoot Dream tells the true-life story of a former football soccer player named Won-Kang Kim, whose failed attempts at making money in the small and brand new nation of East Timor lead him to a group of little kids who have big dreams.

The film is a little bit Danny Boyle’s Slumdog Millionaire, but without the grittiness. It’s a little bit Sang-il Lee’s Hula Girls, replacing the hula-dancing town girls with football-playing boys, and a little bit Clint Eastwood’s Invictus without the political biography. All of them being crowd-pleasing films that will get you to sit at the edge and shed a few tears, some more than others.

It is easy to see why South Korea would choose such a film instead of a more bleak dramatic one, it would have been an easy vote for Academy Award members if it had made the final list. However, A Barefoot Dream does little to stand on its own as a film, only relying on the “based on true events” side. Yes, it’s a positive story about kids playing football to unite a nation with internal turmoil. But that’s it.

Kudos for shooting the film in East Timor and Japan and speaking Indonesian, Japanese and English as well as Korean. Language is an important part of the film as it gradually shows you coach Kim integrating with the kids and culture, speaking their language and mixing it with Korean. Do not watch dubbed.