On the Edge of Light and Shadow 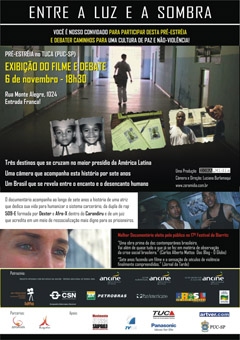 On the Edge of Light and Shadow is a documentary that spans seven years in the life of a Brazilian actress, who devotes herself to working with the prisoners in Carandiru — which was the largest penitentiary in South America [there’s even a movie about the 1992 massacre there]. A couple of the prisoners, Rap duo 509-E members Dexter and Afro-X, who were there for different sentences, are encouraged to create music.

The documentary shows that even though the actress [whose name escapes me, and doesn’t show up anywhere] and the guys from 509-E were born in the same city, but were born in different parts of town and in different families, there’s a disconnect. This is why The Actress spends 20 years of her life working with prisoners on theater workshops, dancing, encouraging them to create music, or paint, while also supporting 509-E in their rap careers in and outside prison. The rap duo is granted permission to perform at events outside prison while still doing their sentences because the judge who granted them permission is convinced that this is a good way to give prisoners a second chance.

Of course, politicians and police enforcement officers are against prisoners going out and commenting on political issues. And of course the duo, young at that time, was against “The Man”, so they didn’t waste any time to speak up.

There are problems in Carandiru, the prisoners take over the prison with hostages — “We have women and kids” read one of the messages they hung — and the situation got out of control. The prison was closed down, the prisoners transferred, and Carandiru was demolished. With terrorist groups running rampant in and out of prison, government officials stopped letting prisoners do public events… even when 509-E was winning big in the Rap festivals and awards.

Finally, as time passed by, Dexter and Afro-X split after Dexter was transfered to another prison and Afro-X was given probation because he was fathering a child with singer Simony.

In a telling ending, both Dexter and The Actress — who were a couple in the beginning of the documentary — tell us what we’ve known all along. Maybe it’s just better to put your best effort in keeping children out of the prisons. Because once people live “the life” and feel proud of it, there’s no going back.