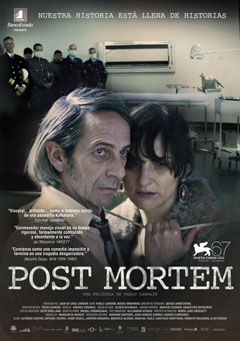 Post Mortem is a surreal romantic drama overlaid political drama that follows Mario (Castro), an employee of the local morgue in Chile in 1973, the year in which the military staged a coup against Salvador Allende.

In its first sequence, almost in a bleak out-of-body daze, we follow Mario as he enters a can-can theater. No one seems to notice him as he moves backstage and he meets Nancy (Zegers). She doesn’t seem any brighter than him. The boss is already displacing her in favor of younger dancers with fuller bodies. They have a bizarre exchange, and it turns out that they’re neighbors… then all of a sudden, she’s dead — naked on the morgue’s cold table.

Was this all in his head? What just happened?

A film like Post Mortem is full of style and ambiance. It always seems quite “off” against the romance aspect of the film, but seems fitting for the eerie sequence that precedes the dismissal of Allende. Both aspects of the film never really fully fuse together, making it a bit disjointed. There’s a lot of silence and pondering that may turn general audiences off, but if you’re in for some magic realism in your films, the stylistic choices or storytelling won’t hinder your enjoyment of the film.

Despite the weird fella that Mario is, we manage to get into him as a character but never deep enough to get completely inside his head. His relation, or attraction, to Nancy starts out almost forcefully just because she’s a woman — quite a damaged woman, at that — and he’s quite damaged a man. Their interactions, against all that’s going on politically around them, feels like death. Maybe that’s the purpose. The most alive Post Mortem gets through its nearly one-note pulse is when we deal with the morgue. His co-worker Sandra (Noguera) has the loudest and most “dramatic” scene in the whole film, as she tries to save one of the few who made it alive into the hospital during the coup. There’s the massacre, which isn’t graphic at all compared to other things we’ve seen on screen, but still has strong imagery to get marked in your subconscious after you’ve seen it on the film.

The most wickedly excruciating scene? The last one where Mario begins stacking things until… there was no more film.

Post Mortem is part of the 2011 Lima Film Festival: