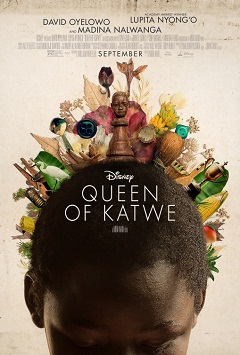 It’s been a while since we have seen Lupita Nyong’s face on the big screen following her Academy Award victory for 12 Years A Slave. Other than Non-Stop, the rest of her appearances took place through voice-acting in Disney films [1, 2] until Mira Nair’s film adaptation of Ugandan chess player Phiona Mutesi’s story premiered on the big screen.

From the start, Queen of Katwe jumps back to 2007 and shows how the residents of the slums of Katwe (Kampala, Uganda) deal with their lives: in dire poverty, lack of education, living everyday to literally survive, and feeling like there is no light at the end of the tunnel. In the case of Phiona Mutesi (Nalwanga), she works long hours selling vegetables in the filthy streets and markets for her widowed mother, Harriet (Nyong’o), to pay for food and clothing for her two younger brothers. Her life takes a drastic change when she meets Robert Katende (Oyelowo), who introduces her to the sport of chess. Curiosity becomes fascination, and Phiona finds herself improving her chess skills while also trying to survive Katwe alongside her family.

Queen of Katwe isn’t your typical Disney film — also co-produced by ESPN, who made people aware of Mutesi’s story years ago as long as you cared for sports or foreign underdog stories — but it does feels like one, sort of. The elements displayed around Phiona’s life could have easily been shown in much darker/striking fashion under another production company. However, director Mira Nair blends in the harsh aspects of Phiona’s story with the positives ones that comes with newfound success, making Queen of Katwe an emotional and uplifting story to watch in the same way Danny Boyle pulled off Slumdog Millionaire years ago. Which one is better, that’s up for debate. I must say that Queen of Katwe is more familiar to something such as McFarland, USA as we get to see more than just the life of the lead character, and how everyone changes for the better.

Direction  and technical aspects aside, much of the strength of the project has to do with the acting that gives the film its emotional impact. Newcomer Madina Nalwanga is pretty impressive here, but she’s also strongly aided by a charming David Oyelowo, whose character compliments Phiona accordingly, as well as dealing with Katende’s own subplot that sees him trying to improve his personal life. On the other hand, while Lupita Nyong’o isn’t shown as much as the two for obvious reasons, she plays very well the role of the mother who is deeply committed to saving her children’s lives at all times.

In a film landscape where voters are now compromised (or forced) to be more diverse, Queen of Katwe stands a chance for Academy Award nominations, unless it somehow gets cancelled out by equal voting with similar films like Loving, to cite one example. Lupita Nyong’o might stand a chance for a Supporting Actress nomination, but I’d prefer for Mira Nair to get one for Best Director instead, even if that’s a tough sell. She has not only pulled off a film about African lives that doesn’t revolve around war or crime, but she has also made chess look engaging to watch despite its lack of popularity with the masses (myself included), managing to get away with straight-up prostitution references in a PG-rated Disney movie.