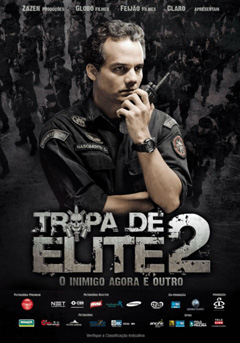 Good news to those who haven’t watched Elite Squad, you don’t really need it to watch this film, but you’ll be aching to watch it after it.

Elite Squad 2 follows Colonel Nascimiento (Moura) after he’s been in charged of the BOPE — Batalhão de Operações Policiais Especiais, the Special Police Operation Battalion — for a few years. After a failed attempt with negotiations with the rebels at a maximum security prison, Nascimiento and his right-hand man Cpt. Andre Matias (Ramiro) are accused of human rights violations by Diogo Fraga (Santos), the man they had been trying to save.

But as all things politics go, Nascimiento is seen like a local hero by the people of Rio, which earns him a promotion as Secretary of Security in the Intelligence Agency, becoming a political tool as his son and ex-wife turn on him for being a “murderer”.

I am actually oversimplifying things because we’ve all lived through this. We all know about violence, some have lived through it, others near it… we all know corruption in the system, and whether we want to believe it exists or not, it’s up to us. Elite Squad 2 is an unapologetic political action crime drama where they show everything raw, from the inmate burning the semi-dead other inmate as if he were a little piggy, the moment a member of the squad blows someone’s head off, or when the dirty cops shoot point blank at the “leaders” of the favelas, or the burnt skull as they’re taking out the teeth.

It all gets hard to watch, considering at points it looks like a mindless action film with all the shooting (no big explosions — sorry, Michael Bay) but then the film brings us back to the harsh reality. Of course hippie human rights supporter Fraga is annoying, Nascimiento finds him annoying… he’s out to get him and Fraga’s got his family, and we see everything through him. Conflicted with his duty to try and “fix” the system, trying to not push his family away, trying to keep his life together — Elite Squad 2 is pretty darn good drama pulling you with both sides of your political gamut camouflaged as an action film.

Moura’s performance is quite superb, but you might all know what he could be capable of if you’ve seen Carandiru. He’s almost like a superhero, and he would be, if Moura hadn’t be able to show all the cracks with Nascimiento’s family. His relationship with his son, who since the split, had been more connected to the antagonist. To his son, Nascimiento (“birth”) kills people for a living — that sentence has so much irony, it hurts — and Fraga (and the mom) do nothing to stop it because they actually believe it.

Overall, Elite Squad 2 isn’t about good or bad. Yes, there are bad people that turn bad because human beings are disgustingly selfish and can get crazy with money and power, especially when there’s loads of it.

Don’t miss out the shows of Elite Squad 2 at the 2011 Lima Film Festival: