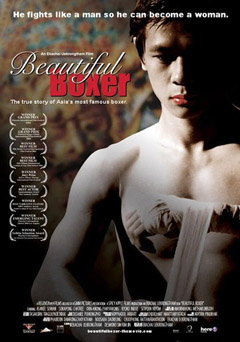 Beautiful Boxer is based on the true life story of model/actress Parinya Charoenphol, a Muay Thai champion who was born a boy.

In it, we see Nong Thoom — played by Sarawuth Tangchit — as a young boy already more interested in traditional dancing done by females than Thai boxing, as he uses his mother’s makeup to do an impromptu performance at home.

In an attempt to get the weird out of him, young Nong Thoom — later played by Natee Pongsopol — gets sent to a temple to become a monk. He’s forbidden to adorn himself, and is being taught how to live simply. However, his desire to become a woman can’t be suppressed, even when he’s told that punishment will come from it, which it does as his mother is jailed and his father gets into an accident. He endures a lot of the bad that’s befallen him, feeling the burden of what people generally think was bad karma.

He sneaks out of the temple to work hard and help his parents until he’s found out. However, instead of getting punished, he’s let go from the monastery… because there are things that must happen.

And they do. Nong Thoom — then played by Asanee Suwan — becomes a delicate teenage boy who hides behind an imaginary girlfriend to buy himself makeup. Surprisingly, no one around him thinks it’s strange. The women in his life support him, and despite having being sent to be a monk, his parents — especially his father — is never fully against it.

Nong Thoom is never pushed by his father to become a man and be a Muay Thai champion… it just comes naturally. As they said, there are things that must happen, and in the case of Nong Thoom that was to become a Thai boxer to become a woman. Parinya Charoenphol’s struggle to become what she is today is what makes this film worth a watch. Beautiful Boxer becomes not only a biographical film, showing us the life of Charoenphol (with slight elements of magic realism), but it also becomes an outstanding portrait of a mixture of religious and cultural components, and how both of these affect Nong Thoom’s psyche and interpersonal relations.

Despite being handled quite simply in its technical aspects, Beautiful Boxer also has some very well-handled — if you like the sport — Thai boxing sequences that are quite wonderfully brutal… if we could refer to the sport as wonderful, and to maintain the theme of the concept of “beautiful boxer.”