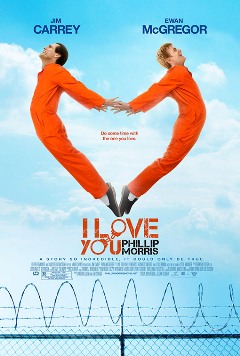 First of all, I Love You Phillip Morris has absolutely nothing to do with the powerful tobacco company or the man it was named after. Instead, the film deals with the real-life story of Steven Jay Russel, con artist and multiple prison escapee, and his lover Phillip Morris.

“Love sure is a funny thing. Makes you happy, makes you sad, makes you do all sorts of things you never thought you’d do before. In fact, love’s the reason I’m laying here dying.”

As Steven Jay Russell (Carrey) is seen on his deathbed, he begins to recall his life, starting from his days as a married man who later turned out to be a gay con artist who ended up in jail.

While getting arrested is indeed unfortunate, Steven tried killing himself to avoid behing locked behind bars, only to fail and actually serve the sentence. Little did he know that he would meet Phillip Morris (McGregor), the love of his life, inside prison.

And from the moment Steven laid eyes on Phillip, he sets himself up to assure a better lifestyle for both… at any cost.

I Love You Phillip Morris is challenging to watch, but this isn’t because we have to watch Jim Carrey playing a gay character. This has do to with Steven Russell himself. While Steven is living proof of how far anyone would go for love, he is also an insanely fucked up man whose crimes and tactics, albeit not murderous, are nothing short of surreal. His personality is obssesive thanks to the desire to live a luxurious lifestyle and his love for Phillip. He is endearing and loveable when it comes to his relationship with Phillip (especially in their earlier days). But at the same time, Steven’s crimes and his personality make him so unlikeable, you almost want to either beat the shit out of the guy or talk some sense into him. After all, Steven is human just like us.

That said, Jim Carrey’s performance is excellent. He flawlessly plays Steven as a charismatic, romantic yet very blunt man who gets crazier as time passes by, especially when it comes to his final act. I Love You Phillip Morris is the best film he has done in years and it’s a good reminder of how great Jim Carrey can be when he isn’t doing typical Hollywood comedies.

But as great as Jim Carrey was in the film, it’s Ewan McGregor as Phillip Morris who makes the film easier to watch. Phillip’s personality is sensitive, endearing and grounded, which helps to digest Russell’s outlandish personality. As Phillip begins to realize what kind of man Steven is, he doesn’t want to have his heart broken. Great performance from Ewan McGregor, whose chemistry with Carrey felt more on the “sweet” side rather than electric.

However, I Love You Phillip Morris isn’t without its flaws. The script tends to drag a bit during the middle portion, and also feels borderline outrageous at times. Leslie Mann and Rodrigo Santoro didn’t do much to stand out in their few minutes of screentime, but that is partially because of the story’s focus more than anything. However, Glenn Ficarra and John Requa — both making their directorial debuts with this film — pull a Steven Russell on us and end up scheming something huge that pays off by the end of the film, making it worth the watch.