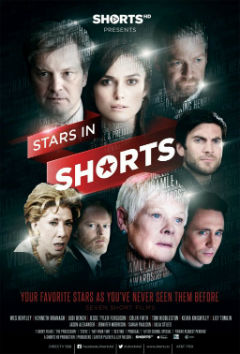 Stars In Shorts is a collection of seven short films that began a limited theatrical release on September 12th, 2012 in the United States, and will run until its VOD release via iTunes online and on Cable & Satellite Pay Per View on October 9, 2012.

Each film, made from 2010 through 2012, has at least one big name star (some have several) and they have run times that range from as short as seven minutes to as long as 25 minutes. When viewed together, the run time is approximately 113 minutes.

While some of the films are more successful than others, the titular stars featured in each give knockout performances.

Lily Tomlin and Jesse Tyler Ferguson are far too hilarious as a mother and son who accidentally become the head of a funeral procession in the aptly named The Procession. It’s arguably the most satisfying film in the bunch. Although, Friend Request Pending, featuring Judi Dench and Tom Hiddleston, works quite well also.

Fans of Keira Knightly and Colin Firth will get a kick out of the Rupert Friend-penned/directed Steve. The actors are amazing in their roles, though the film feels a little underdeveloped.

Jason Alexander is a hoot in Jay Kamen’s fiercely honest comedy/musical Not Your Time, about the ups-and-downs of trying to make it in Hollywood. Homages to Bob Fosse’s All That Jazz are more than welcome.

The most disappointing film in the bunch is actually the longest. Kenneth Branagh and Jennifer Morrison star in the sci-fi snoozer Prodigal, which, clocking in at 25 minutes, makes you go “why do I care?” from the very start.

You can watch trailers for all the films here.