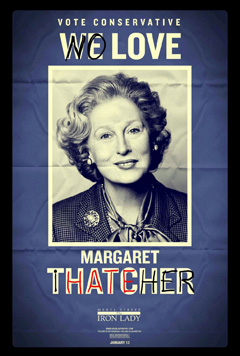 I love how timely this movie is — you know, if you consider what Prince William is doing in the Falkland Island, and all the fuzz going on in South America about Argentina and whatnot.

I also love how the last posters for the film play on how dividing the political figure of Margaret Thatcher actually is to the public. So how can you NOT want to watch a movie like this?

The Iron Lady is a non-linear “biographical” film on Margaret Roberts (Alexandra Roach), the daughter of a grocery shop owner with a political knack, who would eventually become Margaret Thatcher (Streep), the first (and only) female Prime Minister of the United Kingdom.

The film begins with her buying milk and not being spotted by anyone in the shop nor on her way back home. There we realize she is struggling with dementia, as she has routine conversations with her deceased husband, Denis (Broadbent).

Making the harsh realization herself, Thatcher revisits key moments in her life.

I really want to say that I loved the movie, but I didn’t. The screenplay and direction of the film were a sad mess. Considering how eventful Thatcher’s life actually was and how richly political that period of time was, The Iron Lady is reduced to a few couple notable flashbacks. The fact that most forum discussion of the film is about Margaret Thatcher — the person — instead of her depiction tells you that the film doesn’t touch upon any important view of Thatcher.

It was so intent on being objective that they failed to engage the audience.

Having said that, the film does have some great moments, especially when we see Thatcher already surrounded by politics as a member of parliament, and eventually as Prime Minister. The film was already quite long, but I feel that the UK’s situation needed a lot more background to get a perspective on why Thatcher made the decisions she made. We saw the riots, the bombing, but they never felt more than just mere mentions of events.

What is astonishing about The Iron Lady, however, is Meryl Streep — or more specifically, the make-up. I spent most of the movie just looking at her, because I just couldn’t believe it was her. It was even more impressive during the aged Thatcher period, where there was not a single hint of Meryl. It reminded me a lot of La Vie en Rose, in more than one aspect.

Overall, I wish The Iron Lady had been tackled with a more conventional treatment. I really feel like the non-linear storyline took away a lot of the focus and a lot of the importance of a historical figure such as Thatcher, reducing her to an old lady remembering her life and what she had to give up to achieve what she did. I guess this way they soften her up enough, but in my view, that’s a problem.