Pelé: Birth of a Legend 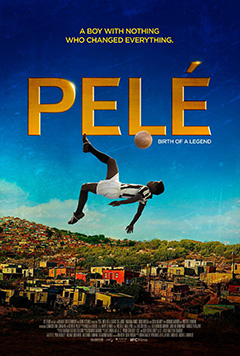 Latin America isn’t exactly the place of feel-good movies— our production output either focuses on slow-burn festival films, sometimes politically-tinted, or bad low-budget comedies. Though an American production, Pelé: Birth of a Legend fills a gap in our continental filmography to enthrall and inspire a generation of kids that may know or not the name of football star Pele.

The film decidedly chose to focus on Pele’s early years (first played by Lima Carvalho, and later by De Paula Rosa) to avoid whatever controversy that may have risen from his later life as a brand and entity (is he the best player in the history of the sport? [1][2]); enforcing that “origin story” [1] of the anointed one. Does it work? It does, painting the tale of the underdog who loved kicking a ball made out of socks (edited liked one of those slick parkour videos on Vimeo), and rose from the poor black neighborhoods of the country against all odds.

Of course, the matches shown in the film are stylized to the point they don’t match the style of playing of the era quite right, making it an overtly cinematic affair as we call on the essence of Ginga [MV] with flashbacks and talks of your self-worth and Brazilian (or Latin American) identity. It builds up from the relationship young Pele, born Edson Arantes do Nascimento, has with Jose (later played by Boneta), the kid whose family Pele’s mom, Celeste (Nunes), works for. Son to an Italian family; both kids represent polar opposites in not only social strata, identity, style of play, but also upbringing. While Pele’s father, Dondinho (Jorge), kept encouraging his son to embrace Ginga and the roots of Brazilian football (much to the dismay of Celeste), Jose’s probably was brought up as an outsider –an Italian who happened to be born in Brazil– taking it full circle when his world crashes at the 1958 World Cup.

Both De Paula Rosa and Lima Carvalho deliver much more effortlessly during their sports scenes than their dramatic punches, but they’re not wooden and their efforts never seem forced…compared to Vincent D’Onofrio’s over the top Portuguese accent, even though Vicente Feola was born to an Italian family, that doesn’t mean he wasn’t raised in Brazil, and therefore had to have a distinctive accent from the other characters on the film. That became a distraction for a while, but the final match manages to get your blood pumping.

Note: Rodrigo Santoro features in a blink and you’ll miss him tracking shot as the Brazilian World Cup Final commentator.