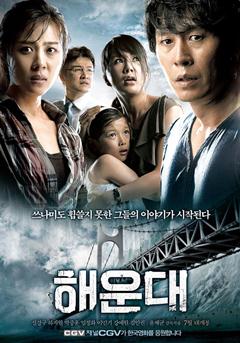 A small community of people are lovingly and realistically ensnared in this unique Korean movie. It’s generally touted as Korea’s first “disaster movie,” yet it is so much more than that. Yeon Hee (Ji-Won) is the daughter of a local fisherman who dies suddenly and leaves her all alone. While she is surrounded with loving neighbors that take her in and care for her as family, she still feels the loneliness of losing her father.

Hwi Kim (Joong-Hoon) is a nationally accredited geologist who tries to alert local authorities that recent earthquakes below the surface of the Sea of Japan could lead to a devastating tidal wave. Eventually, the tidal wave does happen and makes it’s way to the beaches of Haeundae and the cast must fight to survive.

I have a hard time calling this movie a “disaster movie” because there is so much great storytelling to it. The characters are richly developed and they mix in so much humor that you almost forget that something is lurking in the background. In parts it’s gritty and surreal, and others there is so much real-life humor you feel like you’re amongst friends. The action doesn’t even start til an hour and twenty minutes  in — and is over pretty quick. During the disaster they mix in humor. Only Korea can make you scared, laugh, and then cry and then laugh again all in a span of 20 minutes.

If you’re looking for the best of Korea — comedy, action, drama and romance — Haeundae should be on your list.