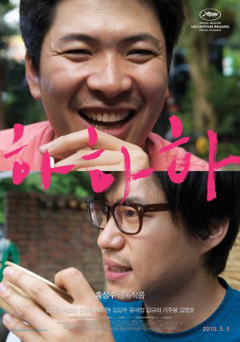 Sang-soo Hong’s HaHaHa follows  the story of Moon-Kyeong, a filmmaker who’s going to Canada, and Jong-Sik, a movie critic — two long-time friends who meet and tell each other about their lives over good food and drinks.

The story is simple. There is nothing life-changing about this film, but it’s a throughly enjoyable ride about the mundane things in ours. The camera eases in and out of their chat, and takes us into their activities in small-town Tongyeong. The town is so tiny that everyone knows each other, and everyone runs into each other without even trying.

The film feels a little bit Love Actually in the sense that you know that characters in one story are overlapping the other. However, it is a lot less tidy, and sometimes leaves you hanging. It is interesting that the three male characters Moon-Kyeong, Jong-Sik and the poet Jung-Ho seem to be the main characters in the story, yet are portrayed as pretty indecisive about their lives, never truly making a decision on their own until the women around them say anything.

It is a very high contrast to the Japanese film/mobile-drama Women Play Twice, in which women were the main characters but played archetypes in the story. In HaHaHa, there are three women playing these guys’ love interests, as well as Yeo-Jong Yun playing Moon-Kyeong’s mother. These are side characters that work and are in these guys’ lives. They eat and drink with them and feel realer than them. In one of the scenes, actress So-Ri Moon, playing cultural guide Seong-Wook, tells the poet, the guy she’s interested in, that she’s going to work… real work.

Overall, the film is very enjoyable — though slowly paced — and is worth character study. This is a very subtle drama with comedic tones and little romance, though it deals with the romantic lives of these people.