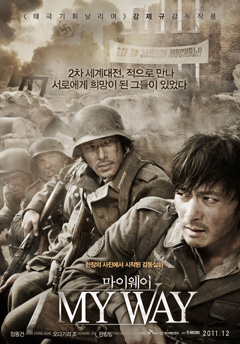 Writer and director Kang Je-gyu is back to the historic war movie genre, alongside Jang Dong-Gun, after their mad successful collaboration on Taegukgi (extended titled in the US as The Brotherhood of War). This time around, however, they are joined by Japanese actor Joe Odagiri and a supporting role for Chinese actress Fan Bingbing.

My Way (written in Hangul and Katakana, respectively) tells the somewhat true story of a Korean man, who after several unfortunate turns of events, was found in Normandy fighting for Nazi Germany on D Day [1]. True fact, that.

The rest of the story, or I guess… most of the emotional impact is adorned by Kang Je-Gyu’s script, which oscillates between Taegukgi greatness territory and outright eye-roll-worthy.

During the Japanese occupation of Korea in 1928, Tatsuo (later played by Odagiri) arrives to live with his family, alongside his grandfather, who is stationed in the Korean capital. Upon his arrival, he meets Joon-Sik (later played by Jang),whose family is the owner of the house where Tatsuo’s family is staying.

The boys immediately start a like/dislike relationship when they compete in their first race against each other, for the both of them love racing and would continue to as the years went by.

After a bomb kills Tatsuo’s grandfather, Joon-Sik’s father is blamed, punished and kicked out of his own place. Joon-Sik is forced to make a living by becoming a rickshaw runner and dreaming of becoming the next Korean Olympic marathon winner.

World War II movies have been done to death. People are tired of Nazis, apparently. Lucky for you, this isn’t about the part of the story you’re told often. Yes, the Japanese are pretty bad in this one too [The Flowers of War], but I think My Way makes up for that with humanizing Joe Odagiri’s character a lot. Tatsuo and Jong-Dae (Kim In-Kwon) — Joon-Sik’s best pal — are the characters that get the most character development, and I dare say~ Jong-Dae might be edging Tatsuo in interestingness.

Part war epic, sports movie and bromance, My Way looks pretty tight. Editing, war sequences, it’s all on par with Kang’s Taegukgi, though the emotional punch is missing. Then again, some may miss that (like me) and others won’t — in fact, some may think My Way is too melodramatic. It’s a matter of tastes…

My biggest pet-peeve? I was really disappointed on how Superman-like Joon-Sik’s character was. He’s the hero, but too simplistic a hero. He only has one thing on his mind… and that’s running. If he’s not thinking about, he’s saving people. It made his character the least interesting of all, even though he was the most important character of all. That goes in complete contrast to the complexity of his role on Taegukgi, battling the idea of “becoming the enemy” because his brother was dead. There’s no such thing in My Way.