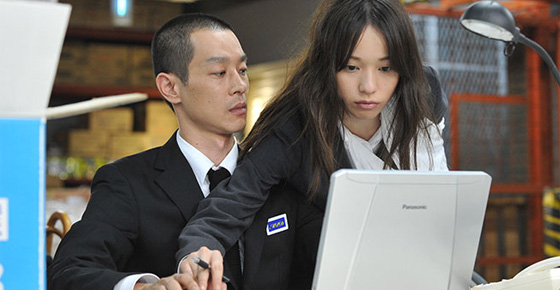 This series sees Erika Toda and Ryo Kase as two detectives trying to track down criminals with supernatural abilities (the suffix of “SPEC” in the title comes from “special”). The two are ill-suited to each other, with the uptight and uncommunicative Sebumi (Kase) clashing with the slobbish genius Toma (Toda).

Although it’s billed as a sequel to the original series from 1999, Keizoku, the only thing the two shows have in common is a lead female role who lacks certain social graces and the setting of an unsolved cases police department lead by Nonomura Koutarou (played in both series by Raita Ryu, whose own SPEC appears to be Not Aging).

Two recurring villains are introduced in the first episode, so that gives some continuity to the first half of the series, which is mostly about investigating different criminals who are suspected of having a spec. As the show progresses, the story focuses in on one villain with the seemingly undefeatable ability to stop time.

The danger with any supernatural drama is the freedom it gives the writers. Almost any cliffhanger can be undone, almost any twist can be conjured up, yet still remain logically consistent within the world that’s been created, since it’s a logically inconsistent world. If you see what I mean. For example, episode eight runs perilously close to undermining the whole series with several unsatisfying plot devices, such as a pop star (Naoto from Exile, playing himself) with a healing ability, children talking in low, guttural voices, and a short David Lynch-esque sequence to kill a minor character.

Apart from that one blemish, the rest of the series remains mostly coherent and the non-paranormal method used to catch the teenager who can stop time is pretty ingenious. The final showdown suffers from having several aspects never being properly explained, but if you’ve made it this far you’re probably not too concerned about every little detail, so it’s just a case of letting it unfold in front of your eyes.

It’s a good-looking show, and the makers have taken the time to replicate and update the original’s style. Erika Toda and Ryo Kase both impress in their roles, but it’s hard not to give most of the plaudits to Erika, who I think puts in her best performance to date. I’d recommend this series to anyone who wants a supernatural crime show that takes these powers to be genuine, or if you don’t mind suspending your disbelief for ten hours.

Finally, there’s a brief after-credits sequence in which Erika Toda (still in character) says to the camera she’s not doing a movie. This could be a reference to an after-credits sequence on the Keizoku movie, which spoke about a sequel but it was never made. So if that movie promised a sequel that never happened then surely that means if this series is promising not to do a sequel…