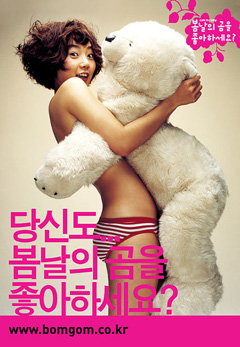 Having to watch Spring Bears Love after I’ve gotten the chance to see Doona Bae in Gloria is certainly a different experience that puts Bae’s talents in perspective.

In here, Bae plays Hyun-jae, a girl who had grown up thinking BIG, wanting to travel around the globe and find the man of her dreams. Everything Hyun-jae has dreamed of is the opposite of her friend Dong-ah (Kim), who dreams of becoming the driver of the metro, where Hyun-jae would be able to ride for free if she only became his wife.

Years after not seeing each other, Hyun-jae discovers secret love messages in art books that she believes are meant for her, just in time for a chance encounter on the metro.

Spring Bears Love is a rather atypically typical movie — it has all the elements behind your run of the mill romantic dramedy, but it feels “indie” in its making. The rather slow pacing, the photography and the music — which apparently was done by Family Outing Elder, Yoon Jong Shin, who has a small but really amusing role in the film — have a rather sentimental flare that is lacking from a glossy romantic comedy splattered with product placement and swiftly edited musical sequences where people go shopping.

Hyun-jae is also not a very likable character, but is as real as possible, blinded by her own “high standards” and not seeing what was right there in front of her. However, Doona Bae makes her work in the only way Doona Bae can — she’s adorable, isn’t she? With those HUGE expressive eyes. In here, she’s as brash as she is on Gloria — no makeup, no bullshit, trying to pretend to be a lady to be liked by the guys she likes… or maybe she just doesn’t notice these things.

She is almost the complete opposite of her friend Mi-Ran (Yoon J-h), who can be as blunt as Hyun-jae but is almost the image of Miss Perfect when a guy she’s interested in is in sight.

However, what’s a romantic story to do without a proper male lead? Nam Jin Kim seems to be up for the task — he’s rather kind of a dufus. Is “Dong-ah” a common name for characters that aren’t supposed to be bright? Anyway, he’s kind of an adorable dufus, and it works for the movie. You root for him from early on and stick with him through thick and thin.

A few parallels can be drawn to staple Korean romantic dramedy My Sassy Girl — rather “sassy” female lead with the silly kind of guy. However, both are definitely different stories. Spring Bears Love has rather low-key imaginative sequences dealing with the now, while the other has big imaginative sequences trying to forget the past and never looking at a future.