My Boyfriend is Type B 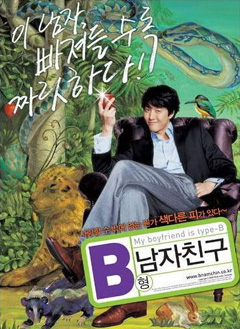 Blood types are big in Korea. Instead of relying on your astrological sign, many Korean’s will ask, “What’s your blood type?” In this film, the writers take the stereotype that “Type B” men tend to be self-involved, arrogant and general jerks and run with it. So when Ha-Mi (Ji-Hye) falls for selfish Young-Bin (Dong-Gun) love quickly fades to anger and distrust.

A guy you love to hate. That describes Young-Bin. Just an all-around jerk. He makes Ha-Mi pay most of the time, never wants to listen to her input and generally takes advantage of her. But, he stands up for her when he needs to and in his own quirky way he shows that he cares about her.

The push and pull dynamic always wins my heart, so I, of course, loved this movie. The natural chemistry between Dong-Gun and Ji-Hye is highly evident, and I was sad that they broke up not long after filming this movie. It’s not much in ways of serious acting or drama, but if you like light-hearted romantic comedies I’d say give this one a shot.