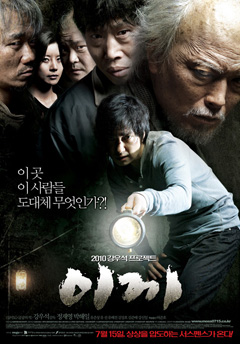 Moss — or Iggi — is a crime mystery drama based on the internet comic by Tae-Ho Yoon. In it, Hae-il Park plays a man visiting a small, secluded village after the passing of his father, whom he is beginning to suspect was murdered by one of the villagers.

Though the film is a little over 2.5 hours, it seldom feels that long. Moss builds up the mystery and tension throughout the first hour of the film, while throwing in some odd jokes to release the tension, and some creepy “supernatural”-like hints to freak you out. However, this is not a supernatural film in which characters get punished by some omnipresent entity. Moss is a character-driven film, in which things happen because of everyone’s own doings.

The film feels a little bit like Winter’s Bone, where the “locals” gang up on the main character to hide something from them, but it’s also a little bit Dogville, in which the bad nature of human beings even ends up catching up with the ones we wouldn’t think would get it. It’s all about the ending.

However, unlike the two films mentioned above, Moss is a film based on a comic, its story is accessible, and it’s certainly not arthouse. This is the type of cinema that Korea should be sharing with the world, their off-beat blockbusters full of qualities that could only mean one thing — It’s a Korean film!