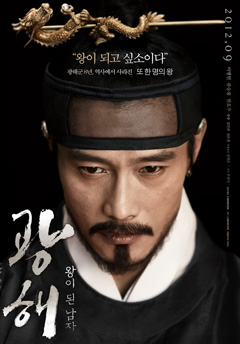 Very much like the Academy Awards, South Korea’s Grand Bell Awards has a certain weakness for its onslaught of period films, though for a good chunk of the new millennium, they’ve been awarding as varied films such as Joint Security Area, Memories of Murder, Spring, Summer, Fall, Winter… and Spring, The Chaser and Poetry.

Last year, they awarded a BUNCH to Masquerade, including most technical categories such as Best Cinematography, Art Direction, Costume Design among others, plus wins for Best Actor, Supporting Actor, Director and, eventually, Film. So… did the hype live up to the expectations? As expected, Masquerade is a technical wonder, considering its budget of less than $10M USD — it’s top-notch period piece craftsmanship and a testament to the technical qualities of the Korean film industry.

Set during the reign of Gwanghae (Lee), the 15th Joseon king from 1574-1641; during which he tried maintaining neutrality in Korea’s relationship to both the Qing and Ming dynasties as well as trying to push for political and economic reforms. The problem is that members of his court are plotting to kill him for it, reason to ask his councilor, Heo Gyun (Ryoo), to find him a decoy… the town’s jester, Ha-seo (Lee in his double role) — it’s the Korean period piece version of The Prince & The Pauper!

Set to stand-in every other time the King needs him, Ha-seo finds himself pretending to be him for fifteen days in which King Gwanghae falls ill as victim of the calculating machinations of court member Park Choong-Seo (Kim M.G). The only person that knows the secret, besides Councilor Heo Gyun is the King’s eunuch (Jang).

I wouldn’t say Lee’s interpretation of Gwanghae is regal — as would be generally expected of a royal piece — but his performance as the clown Ha-seo adds warmth and a certain sense of respect that gives way to some encountered feelings by the resolution of the story. Though I’m not completely sold on the comedy moments, and the side not-a-romance with the Queen (Han). What I did love was Ha-seo’s building big-brother-like relation to the King’s taster, Court Lady Sa-wol which found a lovely Shim Eun-Kyung exuding not only her charm (expertly shown in Sunny), but also gives Masquerade its emotional punch. Though all key players’ acting chops are put to good use during the two hours and a bit.

Despite being mis-marketed as an action period piece by some — I know, China and Hong Kong have spoiled us all! — Masquerade is at its core a light political drama that’s enjoyable but lacks a more intriguing story or a more complicated plot, like the scandalously shocking The Concubine, but then again, if you’re looking for something that’s more targeted towards a general audience, Masquerade is free of R-rated material.

Masquerade will be screening at KOFFIA in Brisbane, Sydney and Melbourne.

You can also get the film on Bluray, DVD and Instant Video on Amazon | iTunes | First Press Korean Bluray or DVD on YesAsia.