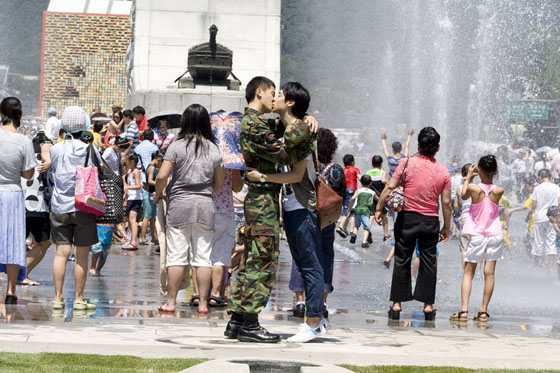 Continuing with Kwang-soo Jho Kim’s shorts. I wanted to review all of them — three in total — but sadly I couldn’t get my hands on his most recent one, LOVE, 100°C.

Just Friends is a very touching coming out story. Seok-i (Je-hoon Lee) and Min-soo (Woo-jin Yeon) are a couple. While Seok-i is on his way to visit Min-soo, who is serving his mandatory time in the Korean military, they are met by Min-soo’s mother who arrives unannounced for her son’s leave. This makes the reunion awkward, seeing as Mommy Dearest doesn’t know that her son is gay.

Min-soo and Seok-i are caught red-handed while getting a little frisky while mom was supposed to be at church.

I love this short a whole lot, not only because Seok-i is completely adorable, but also because the guys want to be respectful towards Min-soo’s mother while trying to have as much time together as possible. My heart goes out to them. What I truly adore is the story. It goes full circle from Min-soo being in the military, his coming out to his mother, to Seok-i joining the military and probably coming out to his mother.

I must give a round of applause to director Kwang-soo Jho Kim for writing and directing a short with a gay soldier. It goes hand in hand with the issues stirring in Korea about it. You see, being gay in Korea is not illegal, just strongly looked down upon. But being gay while in the military is. The military ban was put under review in 2008, while Just Friends came out in 2009. It made for a great way to lobby for LGBT rights, if unintentional.

Sadly, as of April this year, the gay military ban has been found constitutional. Stating that “the need to maintain discipline takes precedence over individual sexual freedom.”[1] Being gay might cause discrimination, but come on! Making it illegal is against human rights! But that’s a discussion for another time.