Take Care of my Cat 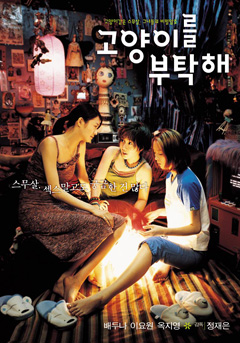 Take Care of my Cat is a movie about friendship, where five girls share a bond full of passion, as they just graduated from high school in Incheon — located at a dingy port one hour away from Seoul. It’s not in the heart of Korea, but it’s close enough to taste “Seoul Life,” or so they dream.

This group of girls had lived all their lives in this city, and had begun to diverge into the adult world — Real Life, which means: nobody takes care of you.

Hae-joo (Lee Yo-Won) dreams of a successful career in the stock company she’s currently working at. She’s moved to Seoul for her future, nearly neglecting her high school best friends, even though she actually needs someone to talk to as she struggles with her academic ability.

After she pretends that everything is going really well in Seoul, resulting in the stranding of her friendship with Ji-young (Ok), Hae-joo finds comfort in her new connection with Tae-hee (Bae).

Ji-young is literally alone — she lives in a nearly-collapsing house with grandparents she has to take care of and can’t do anything to make ends meet, except for dreaming of going overseas to learn design, which might not happen in reality. In contrast, it looks like Tae-hee’s life is set with ease within her family, but she sets herself onto the world by drifting around to wherever life takes her. She has no idea about what she can do, what she wants or where she is. Add to that the lives of her friends that may not seem fair to her, making her confused — life is not simple like a high school textbook.

The interesting point of Take Care of my Cat is how much 20-year-old girls feel the same way as these characters. When it was released in Korea in 2001, it was a box office failure, even though all the critics loved it. However, the target market for the film — young women — wasn’t reached.

Watching a film like this was so hard, even for me, because I had to face the reality away from my fantasy place. At first glance, these girls all look like losers. Nothing glamorous about them, just like me or you, or anyone in my generation. This is why it was such a challenge to watch or feel empathy for them at that time. However, almost three or five years later — for women (or people) in their 20s and 30s — I would recommend it for looking back on our youth.

Now, Take Care of my Cat is like a masterpiece of our generation. Remembering those times… it’s really comforting and took care of our 20s.