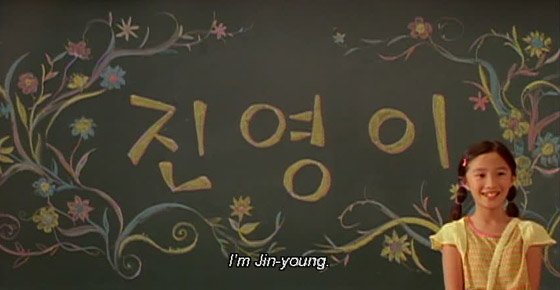 I’m Jin-Young follows the story of a little girl, whose name is Jin-Young (Byun), who can’t wait to grow up. She’s tired of boys and girls her age, she just wants to move on, get married, and be done with it. This feeling of wanting to grow up fast is enhanced when she meets the friend of her mother, Hyun-ji (Kim)… and falls in “love” with her.

This charming coming of age romantic comedy breaks the Fourth Wall, as Jin-Young often addresses us and looks straight at the camera, which works quite well because we could keep rolling our eyes at the little girl, but she keeps pointing it out. She knows we know, and we become not just the audience… we become part of her family. Jin-Young is like a niece telling us her life, as if we were her favorite uncle/aunt.

She falls in “love” with her mom’s friend… who happens to be a girl, and matter-of-factly tells us that relationships between women must work better because they can’t get divorce! She also mentions they can’t get married either, but that doesn’t stop her from comparing life with her dad and her mom.

I’m Jin-Young also has an apt ending, not fairytale-like or bizarre, in which Jin-Young gets what she wants. Instead, she sort of wakes up and realizes that she still has time to be a kid. The short is sweet and very comical — which would label it as a rom-com — but is grounded in reality, making it a very pleasant watch.