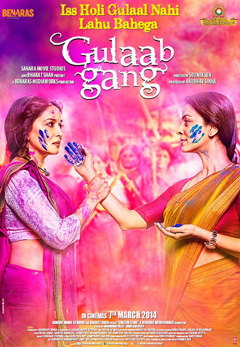 I was completely pumped [1] with the release of the first trailer, and then completely dismayed with the cold reception Gulaab Gang seemed to get from the press. Admittedly, I wasn’t expecting it to break box office records because- DUH! Female-centric films with a certain social message don’t make money *cough* Mrityudand… — and let’s not even discuss the problems in trying to bring Wonder Woman to the screen — but certainly critics didn’t care for numbers, star power or bursting the bubbles of their first on-screen crushes, right? Boy, was I wrong.

I’m glad to say that my instinct wasn’t wrong. I really did enjoy the film — NO SUBTITLES and all. The movie being described as a ‘typical masala’ by some couldn’t be too difficult to get, right? The eternal battle between Good vs. Evil, politics- I’m game and good at it. It is because Gulaab Gang is a typical masala — Fight scenes. Check. Dance scenes. Check. Shoot-out. Check. Car chase… okay, so-so check. Holi celebration. Check. Hero and Villain- wait. Heroine and Villainess. Yes! It’s because this movie IS a typical masala film featuring two females that makes it extra awesome.

The film centers around a group of pink-sari-clad women who fight for social injustice, led by the fire-spirited Rajjo (Dixit), and her two second in command gals Sandhya (Bose) and Mahie (Jagdale), who on a fateful day ran into Kajri (Chatterjee) about to commit suicide. After a series of events that raise Rajjo’s public image, she crosses the path of running-for-office Sumitra Devi (Chawla) who will seize the opportunity to raise her own image with Rajjo’s popularity… or completely destroy her if she refuses.

Let’s start with the truth, because we can handle it- I did think Madhuri Dixit (and perhaps Juhi Chawla too) is a little bit too light-skinned for the role at hand (see who played Little Rajjo), but I’ve seen so much ridiculous casting in Indian movies that it’s easy to disregard the color of the skin. I’m a big fan of Tabu (rumored to have been attached as the lead early on), and though she might be a better fit physically, I don’t trust her with the type of ass-kicking that needed to be done here. Dixit was able to pull off most of the fight sequences to fist-pumping and near-cheering heights, despite some seldom wire-work that wasn’t too subtle. Her stoic and brooding nature wasn’t always consistent, which I’m blaming on the script, which compared to your typical masala means it’s very focused. No romance yo!

There was some really strong acting from all female supporting players especially from Jagdale who got to play the loud and rough Mahie, but the highlight of Gulaab Gang has to be the stand-off between Dixit and Chawla. How many times do you get to see an actor known for their sunshine chirpy personality turn that smirk into the prelude of breaking someone’s backbone, humiliating them by making them crawl in between someone’s legs. Chawla doesn’t come close to gleefully yell “That’s a Bingo!” but she comes close enough with her attitude making us want more of her bad side exploration in other films.

Contrary to popular belief, Dixit and Chawla don’t share many scenes together, but when they do- boy, it’s fun! Especially the very first time they meet following the impending punishment that the Shankar lad (Sudev Nair) is about to receive for taking advantage of a girl during his father’s campaign, with Rajjo waiting on Sumitra’s response to the rape. It’s in that scene when I finally stopped seeing Rajjo as a one-shade ‘hero’ and saw the confrontation between an anti-hero and the villain. Sadly, that tone doesn’t really stay throughout, and sensed that Dixit lost a bit of edge because director Soumik Sen wanted a ‘true hero’ at times.

Overall, though, I’ll watch it again… but this time with subtitles!

You can watch Gulaab Gang with subtitles on the Junglee Film Club YouTube Channel.

Check out our interview with director Soumik Sen.