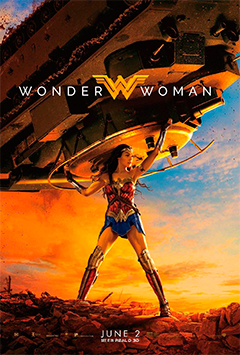 Wonder Woman is the best thing out of the DCEU, and while that’s not saying much what with how irregular that franchise has been since its beginning, this film is good on itself.

The story is basically a huge flashback, with Wonder Woman (Gadot), also known as Diana Prince, in the modern world remembering her origins and how she ended up in the World of Men. In the early 20th century, Diana, Princess of Themyscira, met Steve Trevor (Pine), when she saved him after his plane crashed near the beaches of her island. From then on she will learn about The Great War that’s going on, and decided she will follow Trevor back and bring an end to the war.

This first live-action Wonder Woman movie is fun, something that has been lacking in the DCEU, either taking itself too seriously or being “too edgy”. It has its moments of drama, of course. Which is to be expected with a movie that is half coming-of-age story and half war movie.

Wonder Woman starts with Diana growing up among the Amazons in Themyscira, and the depiction of their warrior society and the beauty of their homeland are both fantastic to behold. Then, when the movie moves to the mortal world, it turns into a “fish out of water” story for Diana, and most of the humor was found on this portion of the story. By the time the film is in the middle of the war front, things take a turn for both the action, drama and quiet moments of character development. All of these different moments flowed almost seamlessly, and the rhythm of the film managed to keep up but for some small exceptions. Director Patty Jenkins is a credit to the DCEU, and they better not let her go for the sequel.

As for Diana herself, despite all the doubts of her casting, and some slight issues with the delivery of some lines, Gadot portrays her perfectly. Leave the morose side of DC for the guys, this Diana is a ray of sunshine. Gadot showed us her strength of body and spirit, but also a naiveté not seen in her character during her Batman V Superman: Dawn of Justice stint. It’s only logical since it’s the first time she gets out of her island. Her candor is specially shown with Pine’s Trevor, with whom she has great chemistry. Because he’s the first man Diana has met, there’s even space for some funny innuendo.

Talking about Trevor, he makes quite the charming character, who is basically Diana’s guide in the outside world, even if he has his own “fish out of water” moment during his short stay in Themyscira. He’s by no means perfect, but it’s with his flaws and those of his allies that Diana will learn more about human nature.

As for the minor characters, many had their moments to shine, even if we didn’t manage to get to known them properly. Like the amazing warrior General Antiope (Wright), mentor of Diana and sister of Queen Hippolyta (Nielsen); or the heterogeneous group of Trevor’s friends that remind me of Captain America‘s Howling commandos, who were basically jerks with hearts of gold of various degrees; or the funny and efficient Etta Candy, Trevor’s secretary (Davis).

The villains were there to provide appropriate conflict, but we didn’t get to see much of their motivations besides “evil”. But it was obvious they had much more depth that we didn’t manage to see, specially Doctor Maru (Anaya), because it was Diana’s story.

The music by Rupert Gregson-Williams was great and managed to blend the Wonder Woman theme (“Is She With You“) made for Batman V Superman: Dawn of Justice, into a new track (“Wonder Woman’s Wrath“) more appropriate for the tone of the film.

As for the action scenes, the choreography of the fight scenes was amazing. I could watch Amazons in general, and Diana in particular, fight all day. The sequence in “no man’s land” was particularly beautiful, and it was only the start of our delight in her battle prowess. Sadly, her last fight was not that great because of the amount of CGI it involved.

In fact, the only really bad thing I could say about the movie is the slight abuse of slow-motion, and a not-so-great final showdown with both villains of the film, General Ludendorff (Huston) and Ares (Thewlis). In the case of the first one, it was a bit of an anti-climax, but it was to be expected in the context of the story. The battle with Ares had the opposite problem. The intention was epicness and, in a certain way, it was. But somehow watching her fight with her Amazon martial arts was more amazing than her lifting a tank or the light show that was fighting a god.

Still, the range of emotions Diana run through during that whole sequence was the highlight of the fight. And the dialogue, while sometimes cheesy, was perfect to what Wonder Woman represents in the DC Universe. Yes, we don’t deserve her, but she will fight for us because she loves us anyway.