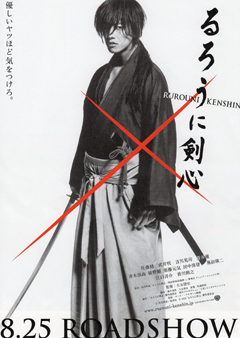 The live adaptation of Rurouni Kenshin last year probably will top anyone’s list of biggest surprises in Japanese film or franchised live action adaptations worldwide in 2012 — probably just behind the unstoppable The Avengers. This adaptation had a lot against it… a beloved manga and anime series with quite a big international fandom and probably not the +$100M or $200M USD [1] of budget that Marvel Studios gives its superhero movies.

With Keishi Ohtomo at the helm, who had previously taken to the small screen NHK’s 2011 historical drama Ryomaden with great success, Rurouni Kenshin delivers in style, action and acting, giving us one of the best adaptations of manga series in a long while that would be greatly enjoyed by fans and average movie-goers alike since the film works as a fine introduction to the series.

For those not familiar with the story, Rurouni Kenshin follows an ex-assassin called Kenshin Himura (Sato) during the Meiji period (1868-1912) trying to atone for his past deeds by protecting those around him. A few of them are Kaoru (Takei) and Megumi (Aoi) who will cross paths with Kenshin and be aided by him against the evil plans of Kanryu (Kagawa) to take over the country with the dealings of opium in the region.

The story is fairly simple, and why shouldn’t it? It’s a blockbuster of easy consumption and a good one at that. Though character build-up is pretty much enhanced with acting — especially for Kenshin, Kaoru and Megumi, giving us some decent dramatic moments and probably setting them up for future sequels — the biggest draw in Rurouni Kenshin has got to be the action sequences and its style. Though it doesn’t look like the Rurouni Kenshin you know, it feels as if Keishi Ohtomo had put the essence of the series in it. Despite his small frame, Takeru Sato delivers when Kenshin fights, flying in the air and sweeping across the floor as he hits people with his reversed blade. Even the ladies get a bit of action at times, and I can’t really recall the last time I saw a woman being thrown up in the air like it hurts. The show stealer was, of course, Teruyuki Kagawa with his over the top, platform-shoed, extremely straight-haired opium dealer and gun/power-obsessed Kanryu, even though he didn’t have to do much but look crazy.

Overall, Rurouni Kenshin was a highly enjoyable action period piece that works as a great introduction to the series and gives way to a possible trilogy. Fans of the series should rejoice, they’ve got a good one in their hands.