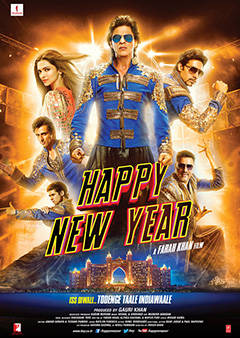 I’m often a Bollywood cynic. And to top it all off, alongside westerns, heist movies aren’t usually my favorite. In fact, I hated Now You See Me with a passion. You can imagine my reaction when I saw the trailer of Happy New Year, and the amount of eye-rolling and groaning that I did.

No sooner said than done.

After a few years in which director Farah Khan and Shahrukh Khan (not blood or legal relation whatsoever) had a spat over who knows what, they’re back together at the pocket money of SRK’s company under the watching eye of wifey Gauri Khan with the massive distribution of YRF. It’s actually not difficult to see how HNY has broken -in its first week of running according to *cough* number reports- every record possible. That’s a winning combo alone, add to it the bonafide latest heroine on top of the Bollywood food chain Padukone in what seemed to be a multistarrer — the biggest name of the supporting cast being everyone’s love-to-hate star “kid” Chhota Bachchan — with over-the-top silly bad dance on top of the exuberant dance candy and overly nonsensical action.

I went in wanting to hate it, I swear… but I couldn’t help but laugh.

For the love of Gawd, I laughed.

For reasons unknown to the audience (after all, half the plots usually revolve around backstories), Charlie (SRK) gets the gang -Tammy (Irani) and Jag (Sood)- together for payback, an honor debt Charlie’s father (Kher in his special cameo) had with Tycoon Charan Groover (Shroff). Instead of just doing it the old fashion way, he plans the overly complicated heist involving Jag’s hacker of a nephew Rohan (Shah), and the highly uneducated drunk Nandu (Bachchan) in their attempt to win a dancing contest that will grant them access to the mighty vault that guards millions of dollars worth in diamonds under the watching eye of Groover.

For that, of course, this group of losers needs to learn how to dance, and that’s how they meet Mohini (Padukone — you know we needed a Madhuri Dixit cameo in there somewhere), who inadvertently joins them in her search for respect… and the chance to open her own “Dence” School. She’s also “in love at first sight” with Charlie because he speaks Angrezi (English).

Ever the queen at self-mockery and self-deprecation, Farah (Shirin Farhad Ki Toh Nikal Padi [Trailer], anyone?) even mocks her brother Sajid (director of gems such as Heyy Babyy, last year’s Himmatwala, or this year’s Humshakals) while giving quick nudges to snotty Ballet teachers, (early viral internet sensation, Benny Lava) choreographer-actor-director Prabhudeva, and I’m sorry- I think Kiku Sharda’s Pakal is one of the funniest on Comedy Nights with Kapil, so I thought his random inclusion doing Chane Ke Khet Mein [clip] was funny. Goes with the Flashdance spoof and/or J.Lo [1][2], as well as Michael Jackson’s Thriller [MV] zombie step… even managing to include Kung Fu Fighting [clip].

In the land where male directors and actors tend to rule, I can even appreciate Farah managing to include as many shots of six-eight packs of her leading men that have such hard nipples that they could cut through glass in as many homoerotic shots as not-so-politically-correct eyebrow-raising gay jokes (at the hand of the revered director-writer-producer Anurag Kayshap in his cameo). It’s basically hitting us with an anvil: “Relax, get a sense of humor.” What I could have definitely be done with is having the constant puking gags (no pun intended) — even though Bachchan got many of the laughs at the theater — and Deepika’s character mooning over Shahrukh’s who was constantly belittling her throughout the whole story for being a bar dancer [1].

As a whole, though , a 3hr. movie that can keep you laughing with only trimming (instead of chopping off the film) on your mind is a big challenge. You can say whatever you want about Shahrukh and Farah, but I’ll take him and their masala flare over seeing Adam Sandler (and Kevin James) on my local multiplexes. Please, make Sandler stop.