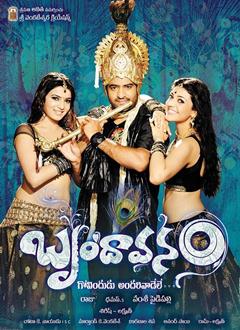 Brindavanam centers around main character Krish (Junior NTR), the lovable youngster that spends his time making other people happy in lieu of focusing on himself. Krish is the kind of guy that helps his friends elope when their parents don’t agree to the marriage, and doesn’t mind taking out a few baddies on the way. So, when his girlfriend Indu (Samantha) begs him to help her college friend Bhoomi (Kajal) escape an arranged marriage, he agrees for her sake. But Krish doesn’t realize that he’s getting himself into the middle of a long-time family feud that spans villages.

In his attempt to ward off Bhoomi’s father (Prakash Raj) he finds himself pretending to be her boyfriend from the city, much to the dislike of Bhoomi’s entire family. Krish spends the majority of the film winning over the entire family and working to reunite the distanced brothers of the household. When he finally succeeds, he’s in for a big surprise — Indu is Bhoomi’s cousin and neither of them realized it! Having developed feelings for Bhoomi and she for him, the rest of the film is spent deciding who Krish will marry — his long time girlfriend or newfound love?

As in many Tollywood films, this one spends a lot of time making you laugh and a lot of time watching people fight. But what makes Brindavanam unique is the dialogue, which I was finally able to understand after buying the official DVD. I saw it in the theater sans subtitles and missed out on a lot of the speeches, but was generally able to follow along. Junior NTR (also known by his nickname Tarak) delivers his lines with the impeccable timing and confidence that his actor lineage is known for.  It’s a really fun movie — the best thing I saw come out of South India last year. There is a great mix of comedy and drama in this one. I didn’t get overly annoyed with the comedy sub-plot as I usually do. The love triangle is a bit frustrating, but understandable since the story centers around the fact that Krish is very similar in characteristics to the god Krishna, known for being playful and having multiple wives (among many other attributes).

Of course, I can’t talk about the film and not talk about the soundtrack and dance sequences. I feel that out of the leading actors in South India, Jr. NTR is one of the best there is. He excels in typical film dance steps, but can also master traditional Indian dance as well. The soundtrack by S.S. Thaman was a wonderful blend of today’s dance and electronic beats mixed with Indian instrumental elements as well. In short, Brindavanam has it all. I definitely recommend this to people who have an interest in getting into Tollywood.

You can watch a subtitled version of Brindavanam on YouTube.