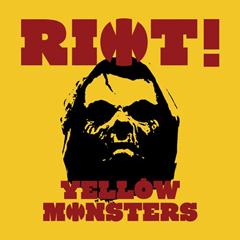 After giving the album a few spins (read: 9 or 10), I finally feel I can speak on the amazing sophomore album from the Yellow Monsters. If I had just gone on first impressions I would have written OMG IT’S SO AWESOME and melted into a puddle. But now, after a couple of calming weeks and a more in-depth review, I can do the album justice.

Sophomore albums are sometimes cursed for new bands that had a strong debut. They change their sound and flop, or stay too much the same and have the same reaction. There is no such problem for the Yellow Monsters and Riot!. The second album from the trio rocks with just as much energy as the first, if anything, it boasts even higher energy songs than it’s predecessor.

The title track Riot!!! is a fast paced, non-stop race to the rock finish line song. It sets the tone for the album and grabbed my attention immediately. But the song that stood out for me was 16th April. The song starts off simple with just Yongwon singing with the piano, but it builds and builds adding string instruments as it goes. The beautiful tension of the song builds to a crescendo and at the end of the song bursts into the Yellow Monsters punk-alternative style. It’s a rock ballad that just turns into a rock anthem, and I love it.

They take on a lighter side of things with songs like Beer and Big Drunk, while staying true to their original sound and style with songs like Old Bassist. The album winds down and finishes out with the lovely track Rain, a slower tempo ballad that shows off the bands musical versatility. Overall, Riot! is a great album that gives Yellow Monsters fans even more to love than before.

Preview on Xiami.com | Like it? Buy on YesAsia | iTunes