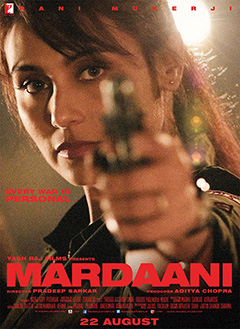 Rani was kind of right when she said that Mardaani was nothing like anything she’d done before. f I had to compare it with any movie, the closest title that comes to mind has to be Brazil’s Elite Squad (not its sequel), a social (or sociological) film posing as an entertainer, though Brazil edges this fighter of a film for its complexities. Back in the homeground, it’s nearly a complete different game.

Mukerji, back since Aiyyaa and her role in Bombay Talkies, plays cop Shivani Shivaji Roy, Senior Crime Inspector in Mumbai, and unlike your typical cop heroes like Salman, Akshay Kumar and Ajay Devgn, she doesn’t silly-dance or falls in love while in the job. She does have a husband, Dr. Bikram Roy (Sengupta), who will be collateral damage on her hunt for the unlikely man (Bhasin) behind the despicable human trafficking network in the country.

When her “adopted” niece, Pyari (Sharma), is kidnapped and pushed to work selling her body for the wealthy in lush parties, Shivani has a very selfish reason to track down the criminals behind the nastiest side of the underworld.

Let’s call it like it is, Shivani isn’t really a cop that plays by the rules because those who play by them can never keep the criminals in jail. In that sense alone, she’s a lot like Moura’s Nascimiento, though crossing the “superhero” line a lot further than him by the end. Mukerji and her interactions with the Mumbai cops feel natural and quite homey against the harsh conditions of her job, as seen from the rat-raid at the brothel. For the lack of a better term, it’s like a breath of fresh air.

Mukerji guides us through this ride where she takes a jab at people criticizing her lack of femininity for the role as if she needed to flip her hair more often when slapping thugs around, she starts her chase during Mumbai peak hour, and actually does kill a person from the back, all before we reach her final line “This is India. When 50 people take the law in their hands and kill someone, it’s not called murder. It’s called public outrage.” It’s chilling, but… in a way, cathartic. Though there have been detractors of the way the film handled the human trafficking subject, I think Mardaani handled it as best as possible- it made us uncomfortable, grimacing while averting our eyes, never showing it in any other light to make us believe the contrary. The film’s characters are clear, and I’d find it difficult to name any other title that would showcase these type of characters as anything but bad. Though Bhasin’s own interpretation never reaches caricature-baddie (That’s a bingo!), it aids him to reach worthy levels of “evilness” contrasting with his reaction to his -sorta- father figure.

The third act in Mardaani, of course, pulls all of Mukerji’s superpowers, but sex trafficking is so wrong that it’s hard to find anyone who wouldn’t actually be happy when “bad guys” get defeated… which brings me to my biggest observation [tiny spoiler ahead]: Shivani’s view on “public outrage” against the one her husband suffered. It makes for an interesting contrast. My take? She never fought it and didn’t care about the public’s perception because she knew why/how it happened, even though it hurt her armor.