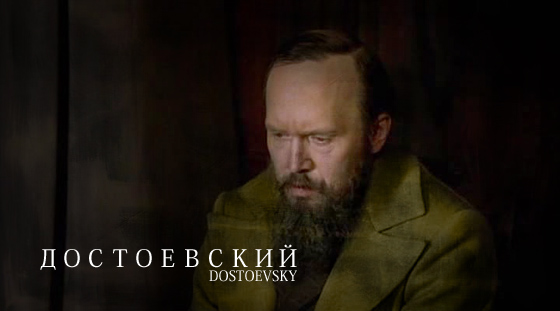 It’s always a challenge to watch films or series in a language you can’t understand without subtitles, especially if they’re historical pieces about a period, a country or a topic you know very little about. Well, this is the case with this 2010/2011 8-episode Russian miniseries on the life of writer Fyodor Dostoevsky simply titled Dostoevsky.

Directed by Vladimir Khotinenko and starring Yevgeny Mironov as the iconic Russian writer, Dostoevsky chronicles his life from when he was about to be executed for criticizing Russian politics and religion in 1849. During the event, a cart pulled in to inform that the Tsar had commuted the sentence, and instead of executing the prisoners, all were sent to Siberia for exile where Dostoevsky spent four years of his life.

Though his stay in Siberia, as well as a symbolical board game with dice he played as a boy, are huge part of the series, the main focus is in Dostoevsky’s love life a lot more than I would’ve liked to. First he fell madly deeply in love with Maria Dmitriyevna Isaeva (Chulpan Khamatova) with whom he had an explosive relationship- a romance turned cold but rooted in… some form… of loyalty as Dostoevsky stays with her until her passing, despite having been romancing his best friend’s, Stepan Yanovsky (Dmitry Pevtsov), significant other… an actress named Aleksandra Ivanovna Schubert (Darya Moroz). But Dostoevsky’s romances seemed to start and fizzle faster than it is to read his novels, and he encounters an array of other different women including the first major Russian female mathematician Sofia Kovalevskaya (Liza Arzamasova).

However, it is Polina Suslova (Olga Smirnova) who steals his affection in another tumultuous relationship as Dostoevsky’s life begins sinking deeper and deeper in debt due to his increasing addiction to gambling and lifestyle. Sporadic loves come and go, despite the focus given to Khamatova and Smirnova on screen, who finally gave way to the woman who would become his second wife, Anna Grigoryevna Snitkina (Alla Yuganova), who stayed with Dostoevsky and pulled him through his financial troubles and personal demons until his death in 1881.

Dostoevsky is marvelously set technically and artistically, with highlights in the acting department- especially from Mironov who truly carries the miniseries, despite how slow and (maybe) dramatically annoying Dostoevsky’s ease to “fall in love” was. At a moment he would be sharp and candid about the memories he had of his exile in Siberia as he tries to rebut the social “progressive” thinking coming Europe via young and enthusiastic Russians, and the next he would be falling for the next girl he set his eyes on. Or, you know, have some psycho angry sex with Polina after he’s threaten to kill her.

I really was expecting a lot more from the story of his life, and I’m sure I would have enjoyed the segments where he reads his work to a room full of (mostly female) students if I were more familiar with his work and had been given proper subtitles, so only recommended for Dostoevsky fans who are into dramatic romances.