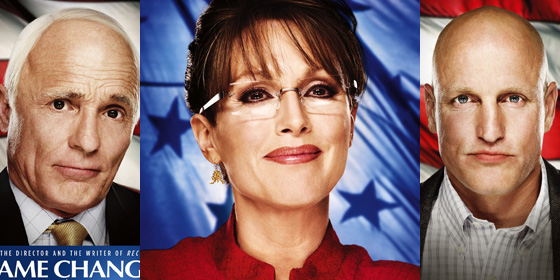 Ah… politics — American politics — hate to love ’em, love to hate ’em. But how delicious they are with a little gossipy insight, huh? That’s what HBO’s latest TV movie adaptation of the book by John Heilemann and Mark Halperin — titled Game Change: Obama and the Clintons, McCain and Palin, and the Race of a Lifetime — is.

Game Change (the movie), however, decides to ditch external factors like Obama’s relation to Joe Biden, the dud of Rudy Giuliani’s presidential campaign, and even John Edwards’ extramarital affair to focus solely on one thing: Sarah Palin — the political monster. I’ll let you decide whether that’s a good thing or a bad one.

Baffled by the effervescent support and instant-celebrity of Democratic presidential candidate, Barack Obama (archive footage of himself), the Republican party is shuffling the pieces trying to find something that would give the party that extra punch. However, while Republican presidential candidate, John McCain (Ed Harris), wants Senator Joe Lieberman as his running mate, senior advisers in his campaign alongside Steve Schmidt (Woody Harrelson) want someone fresh, and they find Palin (Julianne Moore).

And… you know the story, right? I don’t have to tell you?

While Tina Fey made Sarah Palin the punch line of dumb politicians, reviving SNL for a good solid year in the process, Julianne Moore’s interpretation makes her… human. I actually sympathized with her for a good chunk of the film, especially when she was about to break down due to the information overload. You couldn’t make fun of her for not knowing facts or understanding what she was actually getting into — you felt sorry for her.

Once the campaign staff realizes that Palin is better suited for talking and memorizing things — like, let’s face it… politicians do when they’re really good — that’s when things start getting out of their control. Palin became bigger than the Republican ticket, people connected with her because they felt she talked to them. However, and worst of all, Palin liked that. She liked the easy praise she got from the ultra-conservative faction, stuck to it, and in the process sunk the Republican ship. It’s fascinating to watch, especially in the scene where Julianne Moore’s staring at the TV, being unable to turn it off and with a slight content smile creeping on her face.

The rest of the cast does an able job with Harris playing McCain as a pretty mellow guy, really not strong enough to have his people do what he wanted, while Harrelson plays Schmidt as a man who thinks he’s got things under control. In the end, Game Change is a Julianne Moore vehicle, and if anyone should get recognition it is her for the role.

But it’s HBO, so it’s probably gonna get a TV movie nomination~