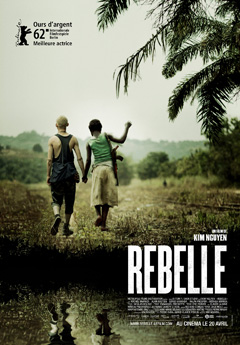 This year’s Canadian entry for the Academy Awards, which managed to nab one of the five nominations for Foreign Film, making it their third film in a row to be nominated following Incendies and Monsieur Lazhar. War Witch, or Rebelle, follows a 14-year-old girl named Komona (Mwanza), who is pregnant and is intent on telling her unborn baby her story of how she ended up in the rebel army.

Abducted at the age of twelve and forced to kill her parents, Komona joins the trope of other kids in a similar situations to her. Trained and brainwashed to think that her rifle is like her own parent, she meets “The Magician” (Kanyinda), an albino boy who lends service to the rebel army. From then on, War Witch sort of switches from the brutal reality of war to a somewhat endearing relationship build-up between Komona and The Magician, and then back to the brutal reality of it all.

The star of War Witch and anchor of it all is, without a doubt, Rachel Mwanza, who has been largely overlooked throughout this year’s award season because… what? War Witch is not in English, War Witch doesn’t have the money to campaign, and we (probably) have an unspoken rule of minority actors Lead Actor/Actress quota that’s already filled with Quvenzhané Wallis’s Hushpuppy. We should probably be thankful that it was nominated in the Best Foreign Film category. In the film, Mwanza is poignant with her dramatic delivery, as well as in the lightest moments of the film, in which she endears the audience as The Magician is trying to find the elusive white rooster he needs for Komona to fulfill her father’s wish for her. It’s surprising to realize that this was Mwanza’s big on-screen debut, winning the Silver Bear for Best Actress, and she is now nominated for Best Actress at the Canadian Screen Awards (previously known as the Genie Awards), where War Witch leads with 12 nominations [1], including Motion Picture, Director, Actress, Supporting Actor and Original Screenplay, and is set to win, at least, a couple of them.

Technically, the film delivers with apt sound in the war scenes, filled with explosions and bullets, and dynamic editing that aids the pacing of the film, never leaving a dull moment to ponder upon the things happening. Even when the film hints at magical realist details, as Komona is believed to be a witch that brings good fortune to the rebel army, her visions of ghosts — including that of her parents, giving War Witch a certain art house vibe —  it never turns its audience off. This is certainly not your average war drama, never focusing on the historical background of the sociopolitical problems that may have triggered all of Komona’s story. Instead, it’s a story about death and life, destruction and creation, so it’s something everyone can relate to.