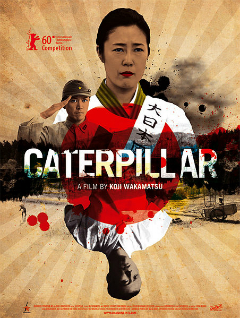 I didn’t plan on  seeing this movie. I saw the trailer, which didn’t really show much — and then I read the synopsis which really didn’t give me a hint as to what the film was about. Amy was on my ass telling me to watch it just because of Shinobu Terajima. I am really glad I got to see this movie.

I am getting a little bit chocked up as I write this. Sitting in the cinema, just five minutes into the film, it was clear that this was one heck of a movie. There is really no way to explain or re-tell how perfectly done this movie is. Can you even say that a movie is perfect? All I know is that after leaving that cinema, I knew that this movie was forever going to be carried inside of me as one of the best movies I have ever seen, and a personal favorite.

Caterpillar tells the story of Shigeko Kurokawa (Terajima) and how her life is changed after her husband comes home from the second Sino-Japanese War as a “war god”. A great honor at the time, but at what price? Her husband, Tadashi Kurokawa (Onishi), comes back home mangled, and it’s up to Shigeko to take care of him as the dutiful wife she is expected to be. But how can you be dutiful when the war gives you back a broken husband that only “eats, pees and sleeps”? Tadashi lost his arms and legs, his hearing and he can’t speak. He has been horribly mutilated by the war and all he wants is to fulfill his basic needs.

Beautiful portrait by Shinobu Terajima — a veteran in the Japanese movie industry — and an amazing job done by the somewhat unknown Shima Onishi, whom I had the pleasure to interview.

What blew me away was the acting. It was so minimal, the movie doesn’t have that many lines, it’s all in their faces, in their gestures. My greatest respect goes to Shima Onishi for not only portraying his role, but the effort he must have put in playing such a crippled man. He only had his face to do the acting and what an actor he is. There is really no way to express how amazing these actors got deep into their roles. Along the way the movie stopped being a movie — it became real life.

Besides portraying Japanese history, Caterpillar also shows us the mentality of the time. I was shocked and affected about how chauvinistic it was. I have known, it’s not hard to understand it while reading Japanese history books, but still, to see it is a whole different thing. I appreciate it though, because once should never forget this kind of happenings.

A small warning, as good as this movie is — it contains graphic scenes that might not be suitable for the prudes. I’m not talking about the sex, but the way they managed to make Shima Onishi look like that. A true masterpiece that sadly was robbed from an Oscar nomination (Japan how could you!?).