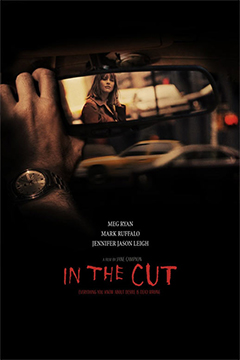 An unsettling rendition of Que Sera Sera by Pink Martini opens Jane Campion’s twisted flick In the Cut. Even when the piano takes over during the opening credits and we’re treated to some beautiful scenes of Jennifer Jason Leigh and flowers, it still forms a strange atmosphere that leads into quite the different film.

Anyone who has only seen something like Campion’s Bright Star would be massively unprepared for what she delivers with In the Cut. Following the murder of a young woman in her neighborhood, writer Frannie Avery (Ryan) comes in contact with the detective (Ruffalo) investigating the case. After a few meetings, the two end up engaging in an affair, and the murder investigation continues unfolding as they continue meeting and woman keep dying.

Jane Campion’s shaky and blurry camerawork sometimes feels strangely out of place, and yet other times it works magnificently, as in Ruffalo and Ryan’s sex scene. It adds an incredibly voyeuristic feel to the scene unfolding, but it can be uncomfortably disorienting in others. What makes her film an interesting one is just how much of a mood piece it is, excellent soundtrack and all. In the Cut is at heart all about the sexual desires of its main character and that fact leaves her in more than enough seedy situations.

Standing at two hours, In the Cut suffers heavily from a story that isn’t all that engaging. Campion’s direction may be fine and dandy for the film she’s trying to set, but almost everything about this script seems like an afterthought. Some vague references to Virginia Woolf’s novel and grasps at surreal moments don’t help much either. Having not read it, I wouldn’t know whether to blame Susanne Moore’s novel for this unfortunate show of storytelling, but nevertheless it’s bit of a slog.

As the story is essentially focused on Frannie Avery and follows the typical murder mystery plot, anything related to the supporting cast falls short. Jennifer Jason Leigh’s character barely works as a plot point and Kevin Bacon’s character is just as useless as his over the top performance.

It’s unfortunate that a film with as much potential as this one fails at telling a narrative, as Ryan’s against-type performance could have been stellar in the right hands. Jane Campion has proven herself time and time again as an excellent writer-director, but In the Cut proves to be a weak link in her oeuvre.