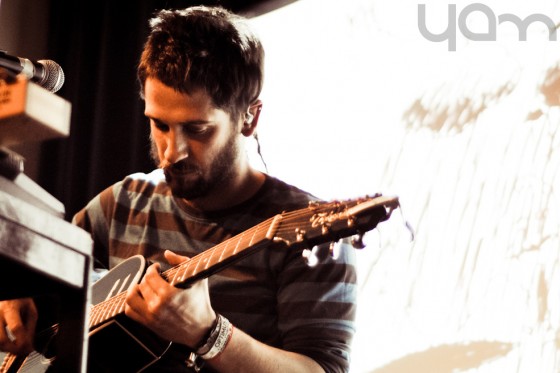 Some music is meant to be heard live. If you have heard Noiserv on album before, it is nothing compared to what he creates once he is on stage. I myself have not been that drawn to his recorded music but once I saw him live, I couldn’t help then to really appreciate his music in a whole different level.

For those of you that do not know, Noiserv (David Santos) is a Portuguese indie artist. His music consist of simple melodies combined with bittersweet lyrics. You can find more about him and listen to his work on his official homepage and his Myspace.

So what is it that makes Noiserv live so special? Well beside seeing him create the music on spot, it is also the live animations by his cousin Diana Mascarenhas. So in one part you have David not only playing, but creating the music live and then you have Diana drawing animations that go in hand with what’s being sung.

I found myself being drawn partly to what Diana was doing and then on what David was doing. It was a very interesting and full musical experience. It was kind of watching a short stop-motion movie but with live music. At the same time it was listening to live music and having the songs come to live in animation.

So about David’s music; he had 16 instruments (!) on stage. He plays some live, he records himself live and then adds playback. It was a huge combination of sounds that grew and grew with each song. During the song Consolation Prize the vibrato grew with such an intensity, at the same time the animation became darker. It was like a perfect combination that created a sensation of…. I really wish I could show you a video of it because I can’t really describe it.

I think the best way to describe Noiserv is by quoting Rune Hauger. He came all the way from Norway to see Noiserv live. According to him

Noiserv is the best indie artist in Europe. I love the way his music builds and grows.

The energy and passion being put on stage by David is really makes the music come alive. There is no real difference from song to song, the sound is the same. But it is a soothing sound, it’s simple yet easy. You can’t help but fall for it.