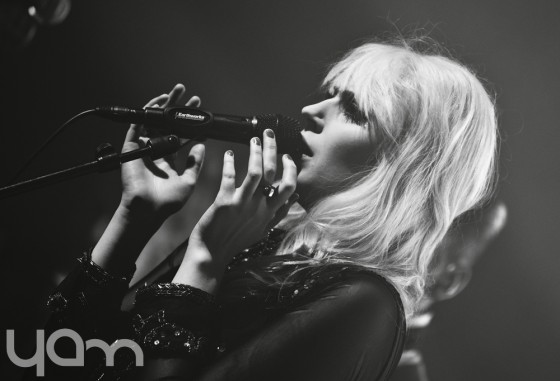 Amanda Jenssen is one of Sweden’s most famous artists discovered through a televised talent show. Her charisma and hoarse voice together with smart lyrics made her popular, and even if she didn’t win the contest, she definitely won the Swedish people’s hearts, and the show was a start to a promising career.

Tonight, she played at the old and historical venue Berns Salonger in Stockholm. Berns Salonger doesn’t fit more than a couple of hundred people, but the high ceiling, balconies  and old décor make the place feel cozy, and as the audience filled the floor just before the show this Friday evening, the atmosphere was nice and warm.

Amanda Jenssen is right now touring Sweden, promoting her new album Hymns for the Haunted, an album with an old-fashioned gypsy sound to it. She enters the stage, with a stand with black cloth around it and a costume suitable for Lady Gaga or Cher, but not in a bad way. It suits her and the set perfectly. Her band is all dressed in 50s swing suits and plays old retro instruments — like contrabass and trumpets.

They start the show with the song Ghost, the second single to be released before the new album. Funny fact: I read somewhere that Amanda Jenssen is deeply superstitious and also believe in ghosts. The song is a perfect one to start off the show. The mood of it is like a big intro which has, of course, a spooky and exciting sound to it that, together with her outfit and the fog in the venue, creates the perfect atmosphere.

After a short talk, where she explained how nice it was to be playing in her hometown and sharing the same stage where legends like Diana Ross and Marlene Dietrich had stood before her, she continued with the song Volcano Swing, another song from her new album, which raised the tempo on stage.

Unfortunately, I was only allowed to take pictures the first three songs, and therefore I had to make my way out after the last one. At that time I realized that the place was almost sold out. I felt kind of annoyed for the others, as I tried to make my way back through the crowd with my large camera. But on the other hand, if I wanted to be popular, I chose the wrong line of work.