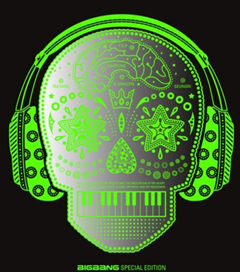 Big Bang released a third version of their fourth mini-album, this time with a few additional songs. When the original edition of this album released, I was disappointed. It was overly auto-tuned and over-produced. Then they released the “Official Acoustic Version” that wasn’t really acoustic at all because they still auto-tuned the guys’ voices. So when Love Song opened with T.O.P. rapping in auto-tune, I was afraid that Big Bang just wasn’t listening to their audience and were going to put out the same electronic beats with too many layers of bionic sounding Big Bang members. But then I was pleasantly surprised to hear the snare drum in the bridge lead to a catchy hook and we actually got to here the members (read: Daesung) sing.

Stupid Liar was another song added to this version and is a delightful mid-tempo song that kind of reminds me of Elva Hsiao’s Big Liar (大說謊家). I kind of want someone to do a mash-up of the two.  The rest of the album adds solo songs from Seungri, Taeyang and Daesung that weren’t on the previous versions, but were gathered from previous releases. Daesung’s song was new and Big Bang fans have been waiting for this under-exposed star to shine as brightly as we knew he could. Baby Don’t Cry has a great 70s/80s rock ballad feel, even if it does sound like it’s got some dolphin’s on back-up vocals. I kid. I love Daesung and I’m glad we got to hear him on his own singing something more than a wannabe trot song.

I’m still on the fence with Café. I don’t care much for men singing in too-high falsetto ie: G-Dragon in this song. Tonight has grown on me and I can actually stand the electronic beats on it now. But I still can’t stand Bom and her chipmunk voice on Oh Yeah. In all, this album is actually a great introduction to Big Bang’s current style and I think that it would actually be a good demo album to get them noticed here in the United States since the general public is still really into the electronic dance side of pop music at the moment.

It may be more of a compilation album than a new release, but I’m glad to say I’m finally back on board the Big Bang “train.” I got off at the last stop to see where we were going, but it looks like the band is heading in the right direction again.

Preview it on | Buy it on YesAsia