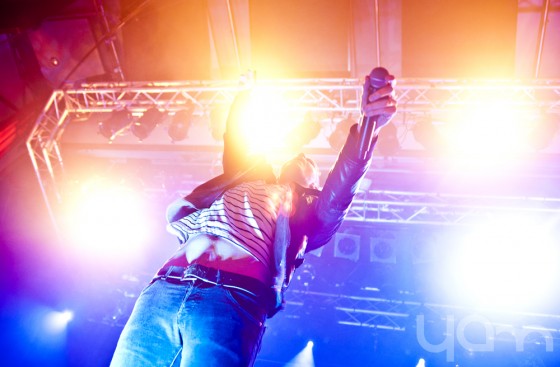 Never heard of Imagine Dragons? They became famous for having their songs on big video games like Assasins Creed 3 and FIFA 13. The indie pop band from Las Vegas is right now touring Europe with their album Night Visions, which is going to be played throughout this spring and summer in Europe.

If I had to describe their music, I would say that it is raw but positive indie pop with a foreign sound that’s very beat-driven by drums. Before I listened to them, I thought – another indie band from Las Vegas, is it going to sound like The Killers? But I was pretty wrong. Sure, they have their similarities; like the song Hear Me which almost sounds like The Killers’ Smile Like You Mean It. Imagine Dragons also has a lot in common with other present indie pop bands with their reoccurring “Ho, Hey and Oh” sounds in their songs, which generally have a playful rhythm and are easy to remember. It is the reason why I believ that we haven’t heard the last from these guys.

Tonight, they played at Debaser Medis in Stockholm and I was there with my camera. As the tickets were released, they were almost instantly sold out. When I arrived to the venue, the line-up was massive! It took a while to get everyone inside, and as the photographers were transported to the photo pit in front of the stage, I could see that the audience consisted of mainly teenagers.

On stage, there were drums everywhere; in the back, on the side, in front of the drummer and in the front of the stage. This confirmed my statement that the drums have a big part in their music. As they entered the stage and the teenage girls behind me started to scream, I regretted the decision that I had not inserted my ear plugs just yet.

They started off with an intro and the singer Dan Reynolds showed his skills on the drums on stage. Their energy was nothing short of spectacular and the response from the audience was awesome, but what struck me as odd was that the sound was pretty strange, because I couldn’t hear a thing about what he was singing, and neither could the other photographers who looked at each other and shared the same confusion. It was almost like the microphone was off.

As fast as the show started, it ended for us photographers and we were led out. I haven’t seen any reviews of the whole show yet, but I guess and hope that they were given pretty good reviews, if they fixed the sound that is.