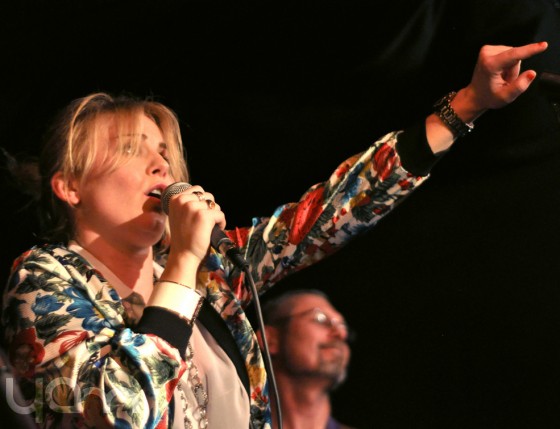 I have been to other Lisah Halling gigs and I must say that I really like her style. I first encountered her when she was just starting off as a singer/songwriter artist. It hardly took a year after that and she formed a band and now she is doing gigs.

I think that what is interesting about Lisah Halling is how she doesn’t have a real musical background. She has never taken any musical lessons; one day she just picked up the guitar and started playing.

For her gig at Southside, the word had spread quickly and over 70 people gathered at the small basement. The gig started off with two supporting acts. The first one was Matilda Öwre, a 16-year old girl who is learning how to play the guitar from Lisah. A young talent that has an amazing voice. The second supporting act was Tomas Griphult, a young Stockholm-based singer/songwriter that has Irish influences in his music. His songs are both catchy and funny.

When Lisah and her band entered the stage they got down right to business. Lisah has composed and written all of the songs she played that night. A setlist containing eleven songs that vary between pop, soul, jazz and a little bit of country.

Part of the crowd that night are already familiar with Lisah’s songs – she has spent this spring playing in open mics around Stockholm as well as had a debut showcase in another pub. Some of the songs that got the crowd singing along were Careface and Soul of Mine.

The atmosphere got quite high and towards the end Tomas Griphult had the crowd jumping and dancing with him as Lisah closed the gig with her song Oh. But the crowd were not satisfied with that and kept asking for more. Everybody wanted to keep on dancing.

In all a very satisfying gig and perhaps the indication of a great artist in the making? I guess time will tell. I for one will keep going to Lisah’s gigs in the future.

Lisah is scheduled to play another gig in Stockholm on June 7th. More information can be found on her Myspace site.