Stockholm got a bit of the Latin fever this weekend when Selam held their first Selam Sounds festival. Head lining the event was the very popular Chilean artist Américo, whom I have read about but never heard.

To be quiet honest, all three artists that played that night were completely new to me. I decided not to listen to anything by them as I wanted to be surprised. I wanted to see if I was going to be swept away by the music.

I had a lot of fun, it was great music and it was a great vibe. In all it was like being in a club, dancing, having fun, sweating. This is what I want more Latin music festivals to be like: great music, great energy. In all, Selam Sounds was to me a knock-out.

So let’s talk the artist shall we? Crossfire + Diva Cruz, Américo and Chico Trujillo were the headlines. All three representing very different musical styles. Selam Sounds made sure to have something for everyone. 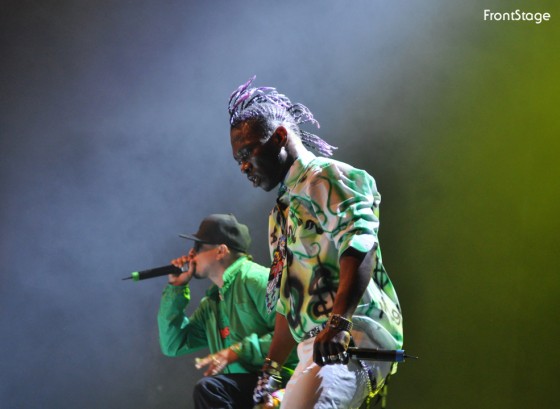 Crossfire started off the night with some dancehall. They got the crowd dancing and really cranked the energy up. It was all “shake-your-booty” music that pleased the crowd to no end.

I was amazed to find out that Crossfire are all part of Swedish music history. Crossfire are Rigo, Cribe and Roz. Rigo and Cribe were part of Infinite Mass and Rigo was also part of Latin Kings. Roz was part of the duo Rob’n’Raz — all of them were really popular back in the 90’s. They pretty much defined the Swedish music back then and now they are working together.

Mixing some of what they are good at, rapping and producing — Crossfire joined forces and has made music that are perfect for parties. Some of their more popular songs being Lady [MV] and Hot Hot Hot [MV]

This evening they had help from Diva Cruz with the percussion. As well as the rapper “Sickinhead”.