Smashing Pumpkins, The – Stockholm, Sweden 2011 – The Other Side of the Kaleidyscope

I was kind of disappointed with the Smashing Pumpkins when they played in Stockholm last week. It’s harsh to say that the concert was a disaster, but I believe that most of the audience was expecting something else because many of them looked disappointed and even sleepy, while some of them closed their eyes and embraced the new spiritual sound of the band.

Front man Billy Corgan has changed the Smashing Pumpkins’ sound so many times that it is hard to figure out what type of music they play right now. If you have to describe it, it would have to be something like spiritual-electronica prog rock. Very strange. 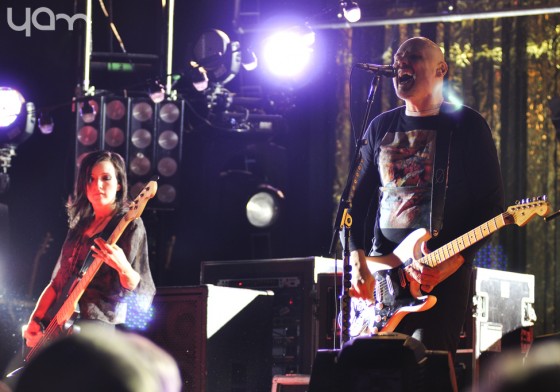 This was a night for the true hardcore fans and people who never heard Smashing Pumpkins before, they are the ones that would more likely have a good time at the show than the old school fans who liked Smashing Pumpkins when they recorded legendary albums like Siamese Dreams and Mellon Collie and the Infinite Sadness.

When you grew up with the Smashing Pumpkins’ greatness, it might be hard to embrace the new sound. Still, when Billy Corgan and the new line-up of the band entered the stage in front of nearly two thousand people at the Annexet Arena, there was a cool feeling of anticipation in my still beating 90’s heart at seeing one of my favorite lead singers on a small and cozy stage.

I waited and waited for them to play some of their beloved classics like Bullet with Butterfly Wings or Disarm, but my waiting was in vain. The band played only new songs for two hours and then left the stage without saying anything, no encore, no nothing. I didn’t understand. Is this nonchalance part of the act? Or, does he want to leave his loyal fans and seek a new audience? If so, why doesn’t he just change the band’s name? It’s sad to think that people will remember this form of Smashing Pumpkins and not the 90’s Smashing Pumpkins.