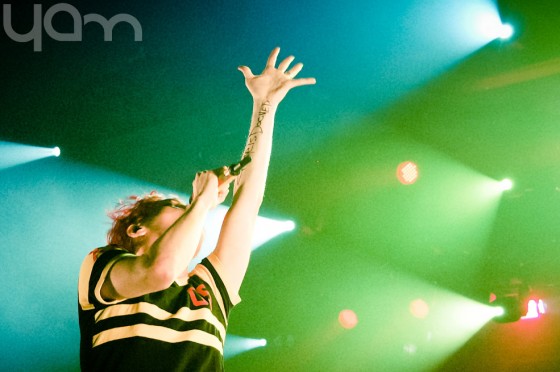 By the end of this concert I was completely beat. Be it because I spent sometime jumping up and down, throwing my hands in the air, screaming like a fool and perhaps crying a little. I went home and fell asleep because I was completely exhausted, my bones felt like water. My Chemical Romance came to Stockholm and completely rocked the house.

I just recently became a My Chemical Romance fan. I heard the single from their latest album, Danger Days: The True Lives of the Fabulous Killjoys, and went bananas on it. So when I heard that they were coming to Sweden, I was not about to miss it.

The concert has moved from “Hovet” to the much smaller “Annexet”. I guess they didn’t sell as expected but I’m quite happy for the change. “Annexet” is so much more intimate. You can see amazingly from all the way back. I was live tweeting for @yammag and I remember complaining about the guys not showing up. At around 20.30 the band jumped on stage and they went straight at it with Na Na Na (Na Na Na Na Na Na Na Na Na). The crowd went nuts and Gerard even more so. Which makes me wonder:

1. How does Gerard do not lose his voice when he sings/shouts so loud;
2. How doesn’t he pass out with all that energy he spends on stage. He was so into it!

Heck they were all into it, Frank was on his part of the stage immersed in his guitar playing, it was so much fun looking at him just go crazy. Can’t forget Ray, he wasn’t going nuts on stage but his solos…. I wish I could marry your solos.

My Chemical romance played a very varied setlist, mixing songs from their last three albums. Screams became loud and everybody started to sing along when they played some of their most beloved songs such as House of Wolves, Teenagers and Welcome to the Black Parade.

I think it’s been a long time since I had such fun at a concert. Gerard said something about them coming back in the summer – I will so be there front and centre.